Police in India are struggling to keep people from leaving their homes and breaking the nationwide lockdown now in place to protect citizens from the novel coronavirus pandemic. The virus is spreading rapidly in the country of over 1.3 billion people. Now, one officer has come up with his own technique for capturing the attention of pedestrians and commuters: a coronavirus helmet.

As CNN reports, Rajesh Babu of Chennai, India, now wears a motorcycle helmet covered in red paint and rounded spikes while doing his daily rounds. The helmet, which was designed by a local artist, resembles the coronavirus, and Babu uses it as a tool to get the attention of travelers who don’t seem to think the pandemic is a big deal.

India has instituted a three-week lockdown in the hopes of curbing the spread of the virus. The pandemic has already claimed at least 27 lives and infected over 1,000 people in the country, but those official numbers may be far lower than the true number of cases, as India, along with many other countries, has struggled with rolling out tests. 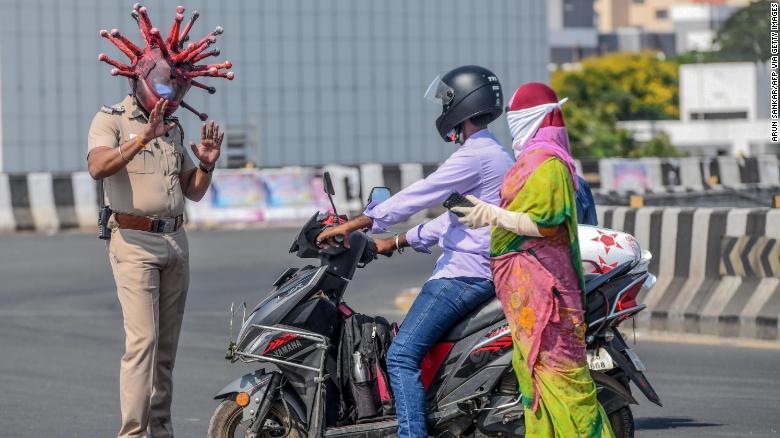 Getting 1.3 billion people to stay put would be a challenge anywhere, but the short notice with which the lockdown was put in place — citizens were given less than a day to prepare — appears to have forced many to leave their homes despite the risks.

Police like Babu work shifts at checkpoints to speak to those who are still out and about, urging them to stay inside for their own safety and the greater good. As one might expect, Babu’s helmet is a real hit, and while it’s undeniably frightening, it’s apparently having its intended effect.

The pandemic, which began as a small outbreak in China way back in late 2019, has rapidly circled the globe and forced many countries to take extreme action. China’s intense lockdown in the Wuhan province, which was considered the epicenter of the outbreak, appears to have helped slow the spread in the country, and officials there are now spending much of their time tracking down smaller clusters to prevent a resurgence.

Meanwhile, countries like Italy and Spain have seen huge numbers of infected patients flooding hospitals and forcing doctors and nurses to make tough decisions. Medical supplies in many areas of the United States are hard to come by, and simple things like new masks and gowns are now treasures.

Shelter-in-place orders are in place in many states, though some are seeing the number of infected patients rise slower than others. New York City has seen the worst of it, with huge spikes in positive tests, but the city is also doing a remarkable job of following social distancing orders and those measures will hopefully begin to pay off sooner rather than later.

Following these guidelines is our best bet at beating the pandemic without a vaccine available. It will likely be at least another year before such preventative drugs are available. In the meantime, keep your distance and do your best to follow the advice of health experts and scientists.