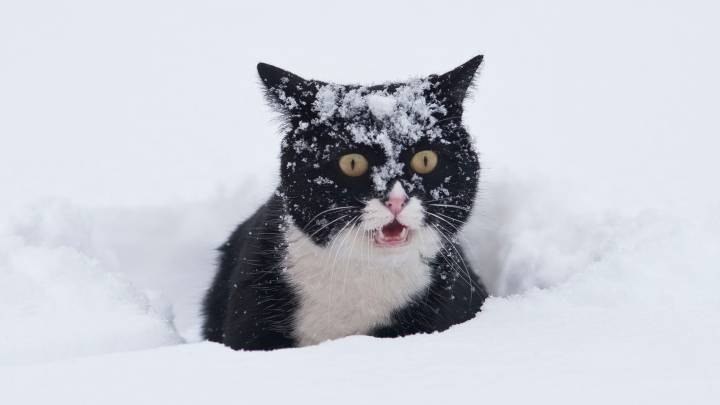 The internet is filled with hilarious clips of cats struggling to fit in all sorts of boxes. Cats of all sizes love boxes of all sizes, and the results are just amazing. So are the memes. This love for boxes is so well known that scientists set out to determine whether cats are built to love this particular geometric shape in favor of others.

And they discovered that cats would indeed sit in any box, even if it’s an invisible box that doesn’t exist. It’s still unclear why that happens, and more research is required to explain a feline’s preference for rectangular shapes, but the researchers have shown that cats can be easily fooled with box-like illusions.

The authors used the Kanisza illusion, which involves arranging four “Pac Man” shapes on the ground in a way that makes them suggest the contours of a square, as seen in the following clip.

They enrolled more than 560 cat owners over Twitter for the project, providing them clear instructions for the experiments. Over the course of six days, the volunteers used the paper shapes to create square-like illusions. The cat owners were also advised to wear sunglasses as not to influence their cats.

The shapes were placed on the floor, and then the cats were invited into the room. The owners then checked to see which shapes the cats chose to sit for more than 3 seconds within 5 minutes after entering the room.

“Due to known research that cats behave most naturally in familiar settings like the home, the citizen science format of this study was the perfect match,” Smith told LiveScience.

Of all the volunteers, only 30 completed the tests. Only 9 cats made at least one choice during the experiments. The felines chose the illusory square seven times, nearly as much as the eight times cats chose real squares. This indicates that the cats are susceptible to the illusion. Smith said the discovery “informs us about the evolution of their vision, specifically their sensitivity to contours and how it compares to humans and other animals.”

It’s unclear why one of the cats chose a different shape instead of the square. “It could be explained as an attraction to the novel stimuli on the floor, and not necessarily attraction to any boxlike attributes of the control,” Smith said.

The researchers still can’t explain the reason behind this choice. It might be that the cats feel comfortable in boxes. Or it’s their instincts that might be kicking in. Boxes are a great place to hide and stalk prey, even though domestic cats are hardly in need of stalking anything.  The scientists plan to see if 3D versions of the Kanizsa illusion work just as well and whether non-domesticated big cats would also behave similarly.