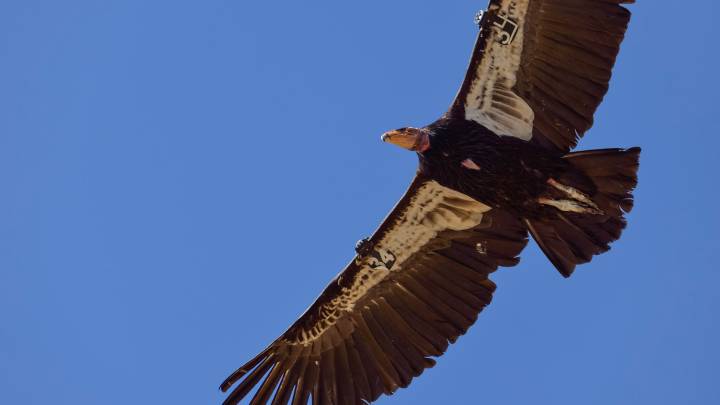 California condors are one of the most endangered bird species in the United States. They’re considered “Critically Endangered,” which is one step away from them being extinct in the wild. They have an incredibly small range that covers small sections of California, Arizona, and Utah, and there are only around 500 of the birds still alive, both in the wild and in captivity. There are so few of the condors left that you’d be hard-pressed to find even a single one of them, but one woman in Tehachapi, California managed to find over a dozen, and she didn’t even have to leave home.

As AP reports, Cinda Mickols recently discovered that her rural home had become a prime perch location for an entire group of condors. An estimated 15 to 20 of the birds have spent the past several days taking up residence at the home where they perch on the roof, railings, and porch. The birds, which are strictly protected by law, have caused quite a bit of damage to the home, and the homeowner is both awed and a bit frustrated at the event.

Mickols’ peculiar predicament was chronicled on Twitter by her daughter, Seana Quintero, who lives in San Francisco but had been getting updates on the situation regularly. The lengthy Twitter thread describing the situation caught a lot of attention, including that of the U.S. Fish and Wildlife Service. The group replied to the Twitter thread and offered a brief explanation as to why the birds may have appeared, as well as some tips on how to deal with them.

Over the weekend ~15 California condors descended on my moms house and absolutely trashed her deck. They still haven’t left. It sucks but also this is unheard of, there’s only 160 of these birds flying free in the state and a flock of them decided to start a war with my mom 😭 pic.twitter.com/bZyHsN58Bk

“Her home is located in historical condor habitat where natural food resources occur,” the group explained. “Unfortunately, they sometimes perceive houses and decks as suitable perch locations. If this happens again, hazing to preclude them from causing damage and habituation is encouraged. This includes using methods that will not harm them such as water hoses, yelling, clapping, shouting, or using other preventative measures such as scarecrow sprinklers.”

The group also notes that they want to keep the condors away from humans if at all possible. “We also discourage people from feeding them or trying to touch them,” the agency added. “We hope this information helps if you experience this situation again.”

Over the course of several days, the birds came and went and came back again. The tips from the wildlife service appear to have helped, however, as the Twitter thread notes that the homeowner used a garden hose and other noise to get the birds to leave the house and retreat to a nearby tree.

As you’d imagine, protecting the birds is a must, especially with only around 500 of them left. Seeing this many in one spot isn’t necessarily unheard of, but the fact that they chose a random house to take up residence on is definitely unusual.