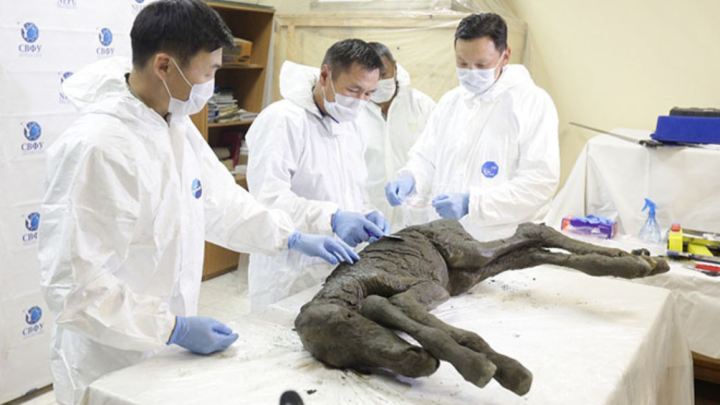 It was just a couple of weeks ago that the discovery of a frozen baby horse began to spread. The animal, which is thought to be as old as 40,000 years, was found frozen in Siberia, and the well-preserved remains offered researchers a glimpse at a species of wild horse that has long been extinct.

Now, with such a pristine specimen in their possession, scientists are attempting to sample the horse’s cells for material they can use to clone it. Yes, they are actually attempting to bring an extinct species back from the death… or are they?

The Siberian Times reports that the researchers are hard at work hunting for cells that would facilitate the cloning process. The team, made up of scientists from Russia and South Korea, plan to harvest an egg from a modern horse in order to artificially manufacture a cloned embryo of the ancient foal. That embryo would then be placed in a surrogate mother who would carry it to term and, if all goes well, give birth to a creature that hasn’t set foot on this planet in thousands of years.

The team seems remarkably confident that they’ll be able to pull off this remarkable series of accomplishments. They even go so far as to suggest that this is really just a stepping stone to an even more monumental achievement: cloning a woolly mammoth.

This all sounds pretty fantastic, but it may come with a bit catch. One of the individuals leading the supposed cloning effort is Hwang Woo-suk, a South Korean researcher who made a name for himself with breakthroughs in stem cell research. He claimed to have successfully harvested stem cells by cloning human embryos for harvest, but it was quickly discovered that his research had been largely falsified, and that he was buying human eggs on the black market.

Woo-suk was slapped a two-year prison sentence which was then suspended, but he failed his subsequent appeals and his charges were upheld. Since that saga, anything with his name attached has been taken with a huge grain of salt, and the cloning of a 40,000-year-old extinct horse should be no different.