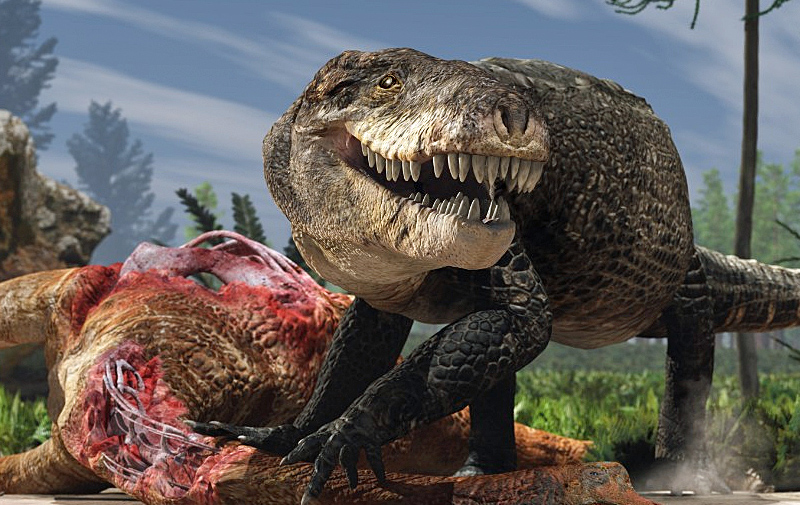 Movies like Jurassic Park paint the Tyrannosaurus Rex as a ferocious hunter capable to crushing bones (and Jeep Grand Cherokees), but more recent research suggests the king of the lizards was largely a scavenger. Now, new research into an ancient species of crocodile paints a picture of a creature that not only boasted teeth as large as a T-Rex, but had an attitude to match its intimidating appearance. It’s called the Razanadrongobe sakalavae, or “Razana” for short, and it’s not something you’d have wanted to encounter on the muddy shore of a Jurassic watering hole.

New research into the ancient crocodile species reveals that its thick jaw bones, deep skull structure, and huge teeth would have made it adept at not just rending flesh from bone, but but pulverizing tendon and bone for consumption as well. Its teeth were also serrated, making it particularly good at tearing through body parts. It was an imposing force in the Jurassic period, and may have even been the top predator in the region (now Madagascar).

“Like these and other gigantic crocs from the Cretaceous, ‘Razana’ could outcompete even theropod dinosaurs, at the top of the food chain” Cristiano Dal Sasso of the Natural History Museum of Milan explains.

The beast would have measured some 23 feet long and weighed in as much as 2,200 pounds. It could swim just fine, but was also skilled at traversing dry land, with erect limbs that lifted it above the ground unlike how modern crocodiles typically slide along. In short, it was yet another example of why you wouldn’t have lasted ten seconds in the Jurassic world.