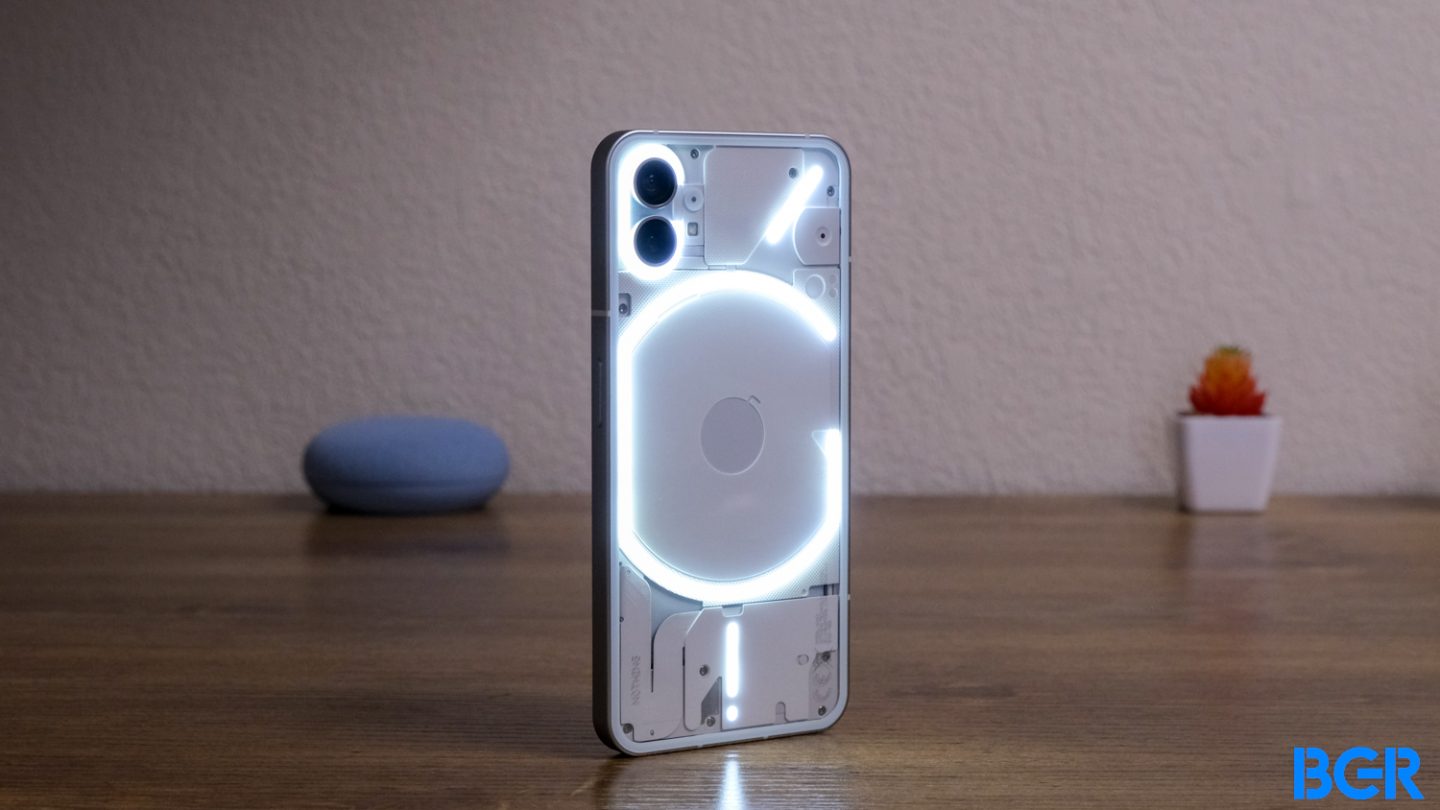 It’s hard to break into the smartphone world. The likes of Apple, Samsung, and Huawei pretty much have the smartphone market on lock — and it takes a lot to convince potential customers that they should give a new brand a chance. That’s what OnePlus did back in 2013. Now, one of OnePlus’ co-founders is aiming to do it again with his new company, Nothing. Enter the Nothing Phone (1).

Of course, Nothing already had somewhat of a hit with the Nothing Ear (1) earbuds, but a smartphone is an entirely different ballgame. The Nothing Phone (1) isn’t aimed at taking on the top-tier iPhones and Galaxys out there. Instead, it’s aimed at the mid-range market, with a sub-$500 price tag and a Snapdragon 778 chip.

But another awesome mid-range phone, the Pixel 6a, recently launched. How does the Nothing Phone (1) compare? I’ve been using it to find out — but keep in mind, you might have to jump through some hoops to get it if you live in the U.S., considering the fact that it’s not officially available here.

The Nothing Phone (1) doesn’t compete with flagship devices, but it’s a solid contender in the mid-range market thanks to its solid design and good performance. 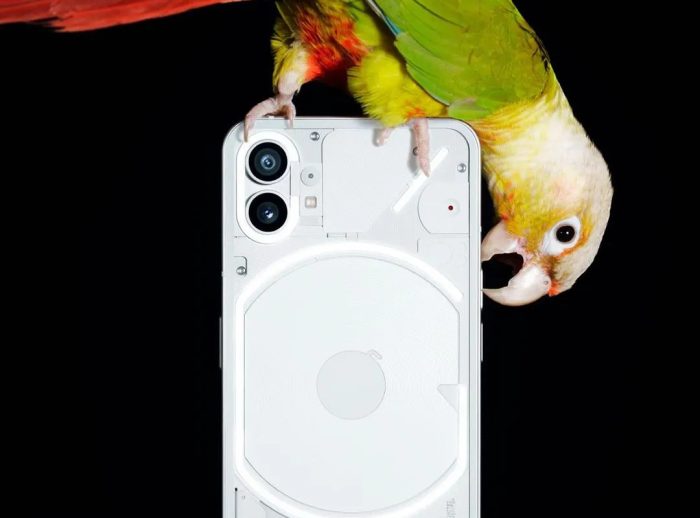 It’s not just see-through though — Nothing also includes its so-called “Glyph Interface” on the back of the phone, which is really just a selection of LED lights that indicate notifications.

I quite like the way that Nothing has curated the external look of the phone. It’s far from revolutionary — it definitely sets the phone apart from much of the competition, but it didn’t really change how I used the phone long-term. If you really embrace the Glyph Interface, you might find yourself setting your phone face down more often, which could be a good thing, but again, it won’t completely change how you interact with your phone.

The rest of the phone’s design is…pretty standard. The device has a similar shape to the iPhone 12 and iPhone 13, with the flat edges. There’s a dual-sensor camera on the back, and an edge-to-edge display on the front with a hole-punch cutout on the top left. There’s a power button on the right edge, and two volume buttons on the left edge. The frame is made of recycled aluminum, while the front and back are Gorilla Glass 5. It’s relatively strong, but could still easily crack if you drop it at the right angle. Like with any modern phone, it may be worth using a case.

The display also gets relatively bright. I found that it was easily bright enough in all situations, including outside in sunlight.

Generally, the display is better than the majority of the competition in this price range. There’s some competition that more or less matches the quality of this display, like the Samsung Galaxy A53 5G. But the fact is that the Nothing Phone (1) is among the best in the midrange phone world.

The Nothing Phone (1) also has an under-display fingerprint sensor, and I found that it worked pretty well the majority of the time.

In day-to-day use, the Nothing Phone (1) felt smooth and responsive, able to easily handle most tasks, including relatively heavy multitasking. That’s despite the fact that my review model had 8GB of RAM instead of 12GB. You’ll easily be able to game on the phone too, and playing games like Call of Duty: Mobile was a breeze.

The phone performed pretty well in benchmarks too. Here are the benchmark results I achieved with this device.

These scores are pretty much what you would expect. They don’t quite reach the heights of flagship phones like the iPhone 13 and Galaxy S22, but they’re respectable for a phone in this price range — and even outpace much of the similarly-priced competition.

Nothing Phone (1) battery and charging

The Nothing Phone (1) has a 4,500mAh battery that Nothing says will last 18 hours of use, but I find that to be a little misleading. Most should be able to get through a full day of use, but if you’re a heavy user that may be difficult. With moderate use, I was able to get to the end of the day, but I still needed to charge overnight.

Thankfully, charging the device is relatively easy. The phone supports fast charging at up 65W, meaning that you can fully charge the phone in a little over an hour. In other words, you could easily get at least a few hours of use in 15 minutes of charging, with the right chargers. Speaking of chargers, you’ll have to buy them separately — you won’t get one in the box.

Generally, I found that the camera was able to capture detailed and bright images with vibrant colors. I found that images weren’t quite as contrast-heavy as images captured by the Pixel 6a, and they were a little lighter. But they’re still relatively accurate to real life.

Because there’s only an ultrawide and main camera, any zoomed shots are digitally zoomed. The software still offers a 2x button for quick zoom, but again, that doesn’t mean that you’re actually switching to a telephoto camera. I did notice a slight shift in overall tone between the ultrawide and telephoto cameras, but it wasn’t as bad as some other phones out there.

The front-facing camera is 16 megapixels, and again, images captured on this camera looked great. They were bright and vibrant, and portrait mode images looked solid. That’s assuming there’s a good amount of light though — in darker environments, portrait mode images were pretty grainy.

Nothing has done a pretty good job at building software that combines the scaled-back feel of stock Android, and the Nothing aesthetic that the company has built over the last year or so. Nothing’s aesthetic circles around dot matrix-style text, and it can be seen mostly in widgets, the Settings menu, and some other stock apps.

Nothing has promised three years of operating system updates for the Nothing Phone (1), however unfortunately you shouldn’t expect to get those updates quickly. While Android 13 is now available, Nothing says it won’t come to the Phone (1) in 2022. That’s a pretty poor effort from Nothing.

The Nothing Phone (1) is an excellent first device from a new company. It’s not a flagship killer, and it’s not a flagship competitor. Instead, it’s a great option in an increasingly competitive price bracket. Sure, it won’t match the camera quality of the Pixel 6a, but it still performs pretty well, has an interesting design, and more.

Should I buy the Nothing Phone (1)?

Yes, but only if you can’t get the Google Pixel 6a.