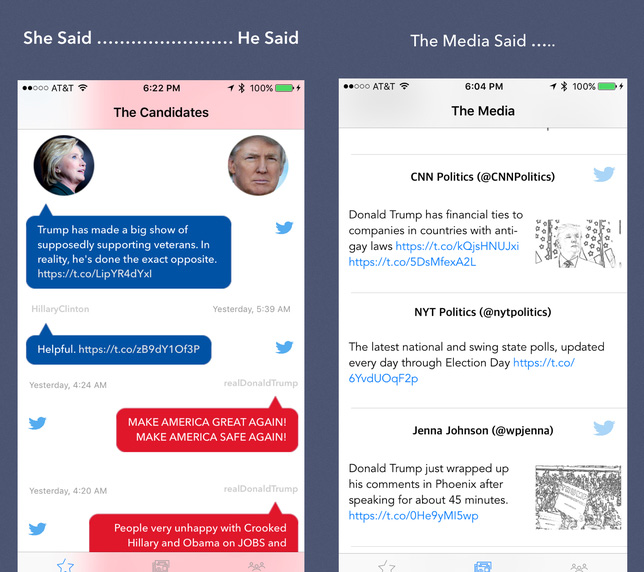 There is absolutely no question that the 2016 campaign trail leading up to November’s election has been and will continue to be one of the most bizarre ordeals in history. Things have been unconventional at best and completely absurd at worst, and the battle has only gotten more sad and strange now that the field has been narrowed down.

Looking for the best possible view to watch along as the democratic system circles the drain? There’s an app for that.

You follow Trump on Twitter. You follow Clinton on Twitter. You love watching both candidates lob dirt at each other like cranky preschoolers in desperate need of a snack and a nap. There’s just one problem: All the other stuff you follow on Twitter — you know, accounts that actually have something of value to offer — keeps getting in the way.

It’s time to check out the Elections 16 app. This free app features a smooth and simple interface that puts Trump and Clinton in a single timeline, showing nothing but their tweets. And when you need a break from all the brain cells that are dying as you monitor that feed, you can switch over to a curated feed of tweets from top political news sites, or a search feed that shows random people tweeting about the election. Good luck with that.

Elections 16 is a free download, and you’ll find it in the iOS App Store by following this link.