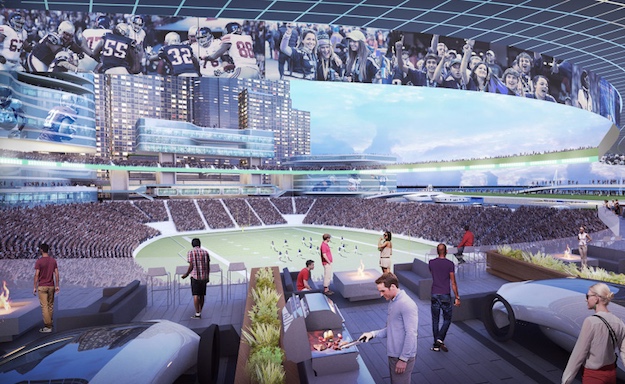 Thanks to the advent of HDTVs, it’s becoming more and more challenging to convince consumers to get up off their comfortable couches, brave the outside world, and enjoy time-honored pastimes such as going to the movies or checking out live sporting events.

In an effort to combat the natural propensity consumers have for the creature comforts of their own abode, both sports arenas and movie theaters in recent years have begun sparing no expense in creating entirely new entertainment experiences. Just the other day, for example, I went to see a movie at a recently revamped AMC theatre. The experience was eye-opening to say the least; the seats were leather, exceedingly comfortable, and reclined like a high-end La-Z boy chair. Not only that, but the selection of food was far more extensive than your traditional selection of popcorn, candy, and gargantuan cups of soda. Some of the new menu options included sushi, gourmet burgers, pizza, milkshakes, Brussels sprouts and more.

In a similar vein, the way sports teams are thinking about constructing stadiums and the overall consumer experience is itself in the midst of a transformation. These days, going to an MLB, NFL or NBA game can be a frustrating experience. The food is expensive, parking is a headache, and if you don’t have prime seats, you might spend the majority of your time watching the action on any number of jumbotrons. In such scenarios, it’s not uncommon for fans to skip the frustration altogether and simply watch the action on a crisp and high quality HDTV.

While some professional sports teams have already begun taking steps to enhance the live sporting experience (mostly with intriguing food options), some of the more interesting and innovative ideas regarding sporting venues haven’t yet been implemented. But that’s liable to change a lot sooner than you might think.

Don’t expect to see 80,000-seat megastadiums in the future. The idea of the single-purpose NFL building is already starting to erode, says Populous architect Greg Sherlock, and it will completely fade away in the long term.

The venue of the future, he suggests, will hit more than one need in a city: “Could the building serve a dual purpose? Integrate the community in recreation and entertainment?” Populous’s predictors say yes; they expect that in the future they’ll be designing stadiums in urban centers with functions that extend outside football, making them viable 365 days per year.

Indeed, imagine the NFL stadium of the future as an integral part of a city’s downtown area, replete with restaurants and completely walkable. With stadiums costing so much money for cities to build, Populous anticipates that future stadium designs will have to be beneficial to the public at large even outside of football Sundays.

Make sure to check out the video below for even more detailed information regarding what we might expect to see in NFL stadiums of the future.