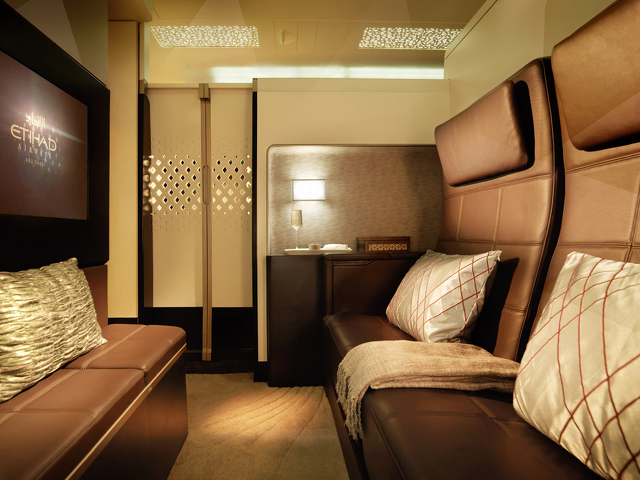 Are you planning to travel to the United Arab Emirates soon? Well, you probably aren’t, but if you are and you have tens of thousands of dollars to spend, you should really consider trying The Residence on Etihad Airways’ A380 jet for the most luxurious flight ever. Brian Kelly, a.k.a., “The Points Guy,” recently took the plunge and spent $32,000 to fly from New York to Abu Dhabi in The Residence and he couldn’t say enough nice things about it. Simply put, this is the epitome of world-class flying.

Among other things, Etihad gives Residence passengers their own butler and their own chef who can make custom meals to meet a guest’s specifications. Being a Residence passenger also means you get three different rooms all to yourself: A living room that features a “Poltrona Frau leather double-seat sofa with ottoman, two dining tables, chilled drinks cabinet and 32-inch flat screen TV”; a bathroom complete with “shower, exclusive toiletries and bathrobes”; and a bedroom that is “decorated with delicate fabrics and furnished with natural fibre mattress double bed, Egyptian cotton sheets and choice of pillows.”

Kelly was personally a big fan of the bed on the flight, which he said was “so comfortable that I felt like I could have been in a luxury hotel.” He also gushed about the fact that the flight’s chef made him a Thanksgiving-style turkey dinner even though it wasn’t listed on the menu and he was beyond impressed by the overall level of service he received. The bottom line, he says, is that it’s “hard for me to express how grateful I am to have experienced this flight,” although he doesn’t see himself spending this kind of money on a single trip ever again.

Check out his video review below to see what it’s like to take the most luxurious flight money can buy.