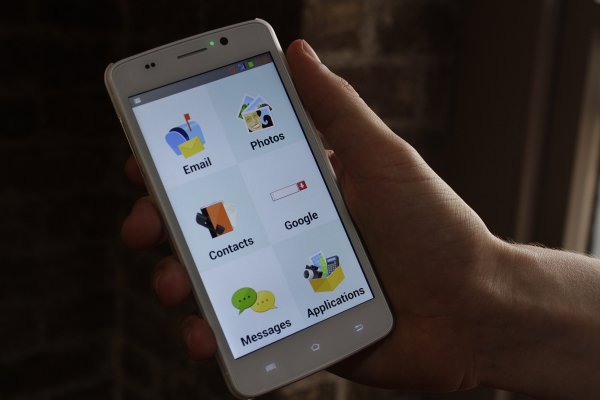 When Lari Numminen and Jukka Kekäläinen set out to improve the user experience on Android, they did not expect to create an entire new phone. Instead, they initially built an Android app that would offer a simple interface for launching your most-used apps. The app eventually was installed 10,000 times, but the developers realized that people still had to use Android’s complex pre-installed apps in addition to their own. To solve this, they decided to create their own phone, which is called the Zilta and will be available in December for €139 (about $189) in Europe.

The phone will run a forked version of Android 4.4 and features an extremely simple user interface. There are six big icons on the screen for the basic tasks nearly everyone uses on a smartphone: email, a web browser, contacts, photos, messages, and a sixth that brings users to more apps and settings.

“When you look at it, the working principle of our device is entirely built around the law of the vital few (aka the Pareto principle), where the majority of the effects comes from the fewest causes,” Artem Klimkin, Zilta’s marketing manager, told Fast Company. “This is the reason Zilta’s home display has only six buttons, which users can configure to suit 80% of their demands.”

After researching over 15 factories, they eventually found a manufacturer based in Shenzhen, China, to make the Zilta phones. The Zilta comes with 1GB RAM, a quad-core 1.3 GHz processor, a 1800 mAh battery, and a 5MP rear and 2MP front camera. Right now, the team is focused on being able to ship before Christmas, and after that, they’ll consider expanding to more countries.