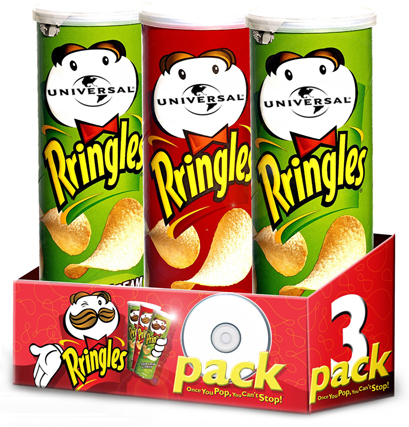 Yeah, guys, you heard it loud and clear. Even though Universal Music did not renew their agreement with iTunes, in no way, shape, or form are they pulling their music library out of iTunes. From what we’ve been told they wanted a better split, and Apple refused to budge. All this means is that they are free to explore more “options”, but totally pulling music? They’re stupid and out of it, but not that stupid. Leave it up to the 60 year old suits to understand the latest technology and consumer interest, right? Because what we’re about to tell you next makes perfect sense…Universal Music Group and the major labels are about to begin rolling out something called a “RINGLE.” You know, like a single? Except this will be 3 songs packaged together with a ringtone and wallpaper image for your cell phone. The truly idiotic part? These will be physical shipped goods that will be stocked in retailers across the country. Wal-Mart and Best Buy have already jumped on board to start carrying RINGLES. If you break down the cost of 3 songs on iTunes, a typical ringtone, and wallpaper, you get around $6.00. RINGLES will sell in stores for $5.98, but will most likely be on sale and discounted to around $4.00-$4.50. While this is a little bit lower than the traditional digital copies, we still haven’t been told how the consumer will actually be able to transfer the ringtones and wallpapers to their handset. If they’re using some sort of short-code and not bypassing a carrier, then this could be one of the stupidest things we’ve seen. Nevermind the fact they’re going ass-backwards and reverting from a digital product to a physical product that must be printed, packaged, shipped, and stocked. Please, Steve Jobs. Please help us. So…are you guys going to run out to your local retailer and shell out $5.98 for a RINGLE, or just buy the one song you really like on iTunes for $.99 and make your own ringtones?