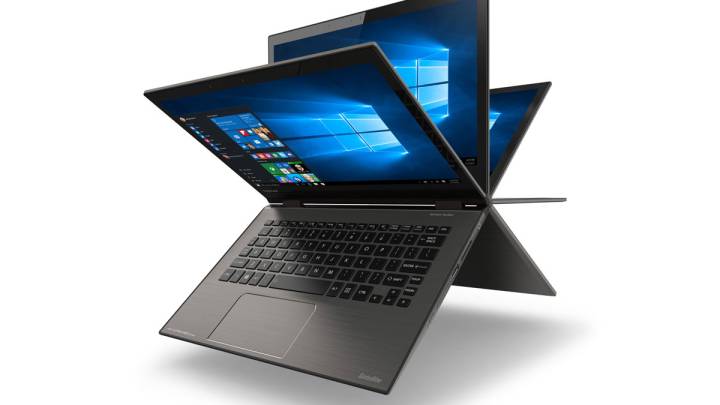 Apple’s 12-inch Retina MacBook is a head-turner, in spite of its perceived lack of performance (and perceived lack of ports). The ultra-portable laptop comes with a high-resolution display that’s even better than the MacBook Air’s screen. The brand new design, made possible by Intel’s increasingly smaller and more power-efficient chips, inspired other companies to come up with similar creations, and Toshiba just unveiled an impressive new Retina MacBook killer.

At 12.5 inches diagonally, the display on the Satellite Radius 12 is even sharper than the Retina MacBook’s screen, sporting Ultra HD or 4K resolution that might be too much for some small devices. Toshiba will also sell a version of the new Satellite computer that has “just” Full HD resolution. Battery estimates aren’t available for the new device in either resolution option.

The laptop weighs just 2.9 pounds, measures 0.6 inches thick, and can be turned into a Windows 10 tablet – oh yes, it runs Microsoft’s best desktop OS yet right out of the gate.

Other specs include Intel Skylake processors up to a Core i7, 8GB of RAM, HD webcam with Windows Hello face unlock support, USB Type-C connector, two USB ports and one HDMI port.

As awesome as the Toshiba Satellite Radius 12 sounds, pricing details and actual release dates aren’t available, so don’t get too excited about buying this particular ultra-portable Windows 10 convertible laptop/tablet just yet. The device is tipped to launch in the fourth quarter, and it should be quite pricey.