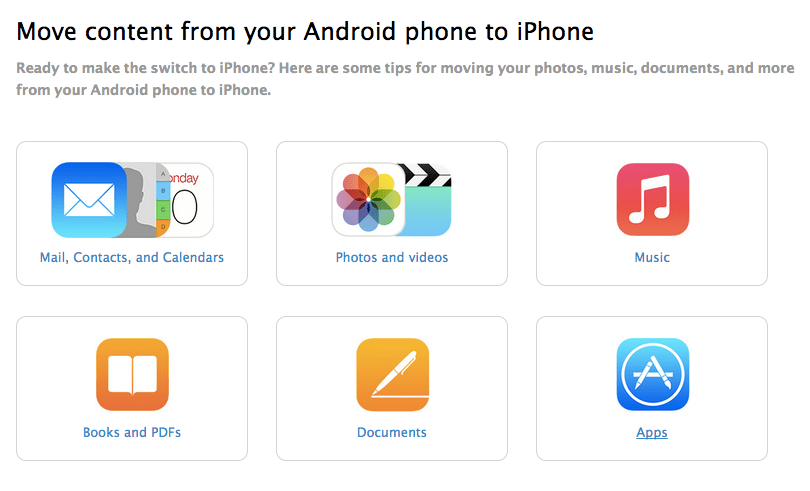 In one of its boldest moves of the year, Samsung released a commercial explaining that the iPhone 6 isn’t exactly a fresh idea. In fact, the Galaxy Note 4, Samsung’s fourth flagship phablet, is heading to store shelves next month, but Apple wasn’t going to let the snark slide by without some form of retaliation. On Tuesday, Apple published a new page on its support site which detailed something many smartphone users are going to need to know this weekend: how to move content from an Android phone to an iPhone 6.

FROM EARLIER: Diehard Android fan explains how Apple convinced him to buy the iPhone 6

For your email, your contacts and your calendars, there are several ways to transport the data without much hassle. Now that much of our information is associated directly with our email accounts, moving it all over can be as simple as adding an account to your new iPhone and choosing to import contacts and calendars as well.

There are also a few data-transferring apps, such as Copy My Data and AT&T Mobile Transfer, which will either allow you to move the data on to and then back off of a computer or simply beam it over a WiFi connection. You can also log in to a social media account and turn on Contacts and Calendars.

Photos and videos are just as easy. You can either use an app like the ones listed above or connect to a computer with your Android device, drag the files into an easily accessibly folder, connect your iPhone and choose to “Sync Photos from” the folder.

Music, books and documents are all transferable as well — just check the support page to see how to move the content safely and efficiently. Of course, you won’t be able to move your apps from Android to iOS, but as Apple notes: