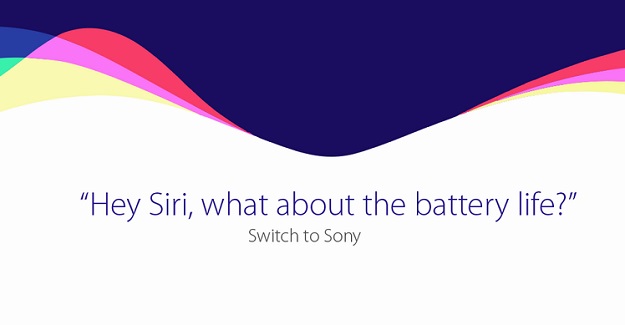 In the wake of Apple’s special event this week, Sony has been trying to steal a bit of Apple’s shine with a few good-natured tweets designed to poke fun at the battery life and camera on recently unveiled iPhone 6s.

//platform.twitter.com/widgets.jsObviously, Sony here replaced the “Hey Siri” tagline with “Hey Sony” and placed it above a string of binary code which translates into “Game on.” Topped off with a SonyBanter hashtag, it’s not a bad little jab. But still, given that the Xperia’s market share, and even relevance for that matter, is so far behind the iPhone, it’s hard to take this troll job all that seriously.

Following up on that, Sony took to mocking the iPhone 6s’ battery life once the event ended. Of course, the recently unveiled Sony Xperia Z5 series boasts battery life of up to 2 days, so Sony certainly has some bragging rights here.

A battery life worth talking about… Up to 2 days’ battery with #Xperia Z5 series: http://t.co/n7KuPge34V pic.twitter.com/ldA7KWYyns — Sony Xperia (@sonyxperia) September 9, 2015

//platform.twitter.com/widgets.jsAnd then yesterday morning, Sony struck again, this time with a video touting the Xperia’s 23 megapixel camera over the iPhone’s 12 megapixel camera. The video starts out with something of a Samsung-esque jab, asking users if they’d rather be Wall-Huggers or have Battery Freedom.

//platform.twitter.com/widgets.jsFollowing up on that, Sony then tweeted out the following.

The Xperia Z5 Premium, of course, is the first smartphone to sport a 4K display.

All in all, some decent trolling from Sony.