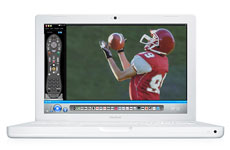 Well they have finally gone and done it. The much rumored-awaited-release of the SlingPlayer Mac Client has gone live. If you have been living under a cell tower for the last couple years you would know that Sling Media provides one of the most innovative, and all around cool services – to watch your TV from anywhere on this planet. Your computer, and your mobile phone. I have been using the Mac beta client for the last couple months and found it to be as easy to use as the PC version, and as stable, if not more. Click below for the SlingPlayer Mac goodness