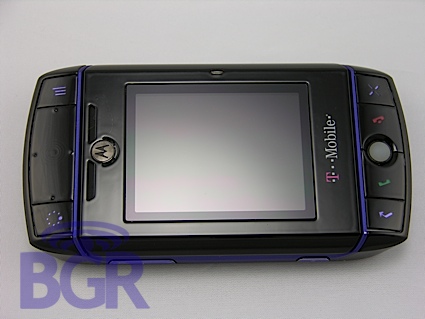 Yeah, I know we got you excited yesterday, and were complete asses for not posting information on it, but what can we say, it was a busy day! The Sidekick Slide is an upcoming Danger/T-Mobile Sidekick that’s rumored to launch this year in Q3. We’re not sure what sort of launch plans T-Mobile has in store for the Sidekick Slide and the Sidekick 4. They seem like two entirely different devices. With the features this has, it doesn’t seem to scream “low end” at us. The Slide’s features though, aren’t that revolutionary by any means. It packs a quad-band GSM/EDGE radio (finally!), and an amazingly crisp higher resolution screen than previous incarnations. The screen is visibly smaller than the Sidekick 3, looks about the same size as the Sidekick iD, but the smaller size really isn’t that noticeable. We love the screen. Danger’s 4.0 OS isn’t revolutionary as well compared to the other ‘kicks, more like a minor upgrade. But keep in mind that this is a pre-production model with specs, hardware, and software that can possibly change before release. Check out the rest of our Hands On! mini-review of the Sidekick Slide after the jump!

Operating System: Off the bat you’ll notice new system sounds, which are great, and a couple more options in the “Settings”. Applications have got a little “upgraded” if you will, but not really feature-wise, just more pleasurable to look at.

Instant Messaging: The popular Instant Messaging services all look better, and are a little more reliable, if that is even possible. It really ends there. There are no new features in AIM. No file sending, nothing.

Size: In terms of size, the Sidekick Slide is a pleasure to use and hold. It’s a little longer than a BlackBerry 8800, a tad less wide, and a bit thicker. Pretty good size all around. The back of the device has a rubberized finish which is the “oh so cool to have” paint job a lot of manufacturers are using. In general though, the Slide feels really cheap. Like cheap plastic. Maybe because it’s made of cheap plastic? Never I tells ya!

Keyboard: One major thing the Sidekick series is known for, are their fantastic keyboards. What do we think about the Sidekick Slide’s keyboard? Pretty good, but we’ll reserve final judgment for a production version. The keys on the keyboard are perfect circles and are pretty small in size. We don’t have a problem with the size really, but we wished there was a little more tactile feedback when a key was pressed. Hence us leaving the keyboard debate up in the air — this is a very early prototype and the general feeling is that this will be addressed before the Sidekick Slide is mass-produced.

Reception: Any real Sidekick user can tell you about reception woes. One minute you’re at 4 bars, and the next you’re staring at either a “2 dot dance”, or a nice “X” on the home screen. Not really a concern on here as much, but we’ve noticed a couple reception problems throughout the day.

Call Quality: The phone quality is on par or better than the SK3. The way Motorola (or Danger, however you look at it) integrated the ear speaker into the actual “slide” was great. It is a perfect location, and makes using the device as a phone less awkward.

Speaker Volume/Quality: External speakers, what are we gone’ do with you… Well, this is where the Slide really shines. It’s so damn loud and clear! I along with a number of other users was a little disappointed with the speaker on the Sidekick 3, and this definitely makes up for it. You can see on the back of the device that there’s grooved pattern along the rear. Besides adding some texture and depth to the look, it allows the speaker to perform beautifully. Right by the T-Mobile logo is where the external speaker is housed.

Catalog: Not too much to report on this at this moment. It looks like the Application and Games folders have been merged, but we can’t foresee this happening at release time. Themes are finally available for purchase though in the Catalog. Oh yeah! Finally, we do not have to deal with “blocks” ever again. We have real space as in Kilobytes to refer to when we are downloading stuff.

We hope you got a good taste of what the Sidekick Slide is, and what it will offer. It’s so far our favorite Sidekick to date, but maybe we’re just hype. It does combine every existing feature we’re used to, and improves on some of them. So there isn’t much to hate when we’re getting that in a smaller, hipper device. We’ll go over every single feature you want to know about (the d-pad for instance) in our video review that will be posted soon. So sit tight for now! In the meantime, click on onto to our Sidekick Slide gallery!

Take a closer look at the Sidekick Slide (Zante) over here!