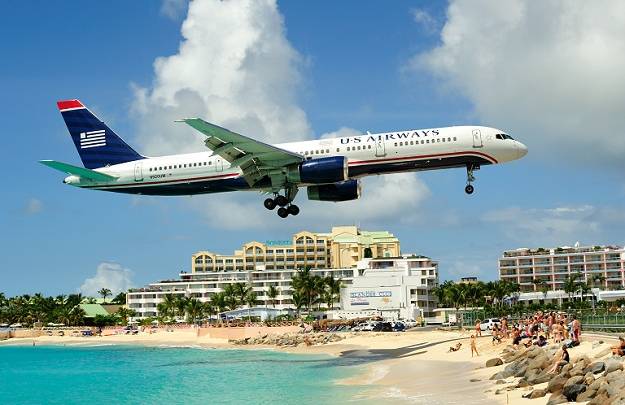 Over the past few weeks, we’ve highlighted a number of videos depicting airplanes taking off at breakneck speed and astounding angles. From an F-16 Fighter Jet climbing 15,000 feet in 20 seconds to a Boeing 787-9 Dreamliner that can take off at an almost 90 degree angle, you’ve probably had your fill of takeoffs, for now.

Remember the video of that insane Boeing 777 landing in the middle of a 75MPH windstorm? Well today, on this lazy Friday, we thought we’d flip the script and show you some of the more unique airport runways around the world that typically make for harrowing landings. From the ridiculously dangerous and short runway at the Courchevel Altiport in the French Alps to the famous Princess Juliana International Airport in St. Maarten, you might want to stay grounded for a while after watching these.

Without question, have to start with Princess Juliana International Airport in St. Maarten. This airport runway lies eerily close to a tourist friendly beach and is practically famous for planes approaching at altitudes so low that beachgoers either want to run for cover or stay put and experience the rush of being abnormally close to a plane flying overhead.

Imagine catching a few rays on the beach and being greeted by this monster steadily approaching from off in the distance.

Located in Nepal, the Lukla Airport was once voted by the History Channel as the most extreme airport in the world. Known more widely as the airport one flies into before trekking up Mt. Everest, the Lukla Airport runway is nestled between a mountain on one end and a 1,000 foot drop into a valley on the other. And as if that weren’t terrifying enough, the entire runway is only 1,729 ft long.

Also known as the St. Jean Airport, the runway at this airport on St. Barts Island is not only narrow, but planes coming in for a landing have to be careful as to not hit a sloping hillside upon approaching. At the same time, hitting the runway too late might leave your plane in the water.

And here’s what it looks like from the pilot’s perspective.

Nestled in the French Alps, the runway here is built into the side of a mountain and is assuredly not for the faint of heart. Not only does the runway slope upwards with a gradient of 18.6%, it’s also extremely short, measuring in at just 1,762 feet. Needless to say, there’s not much room for error when landing here.

Tucked away in the Caribbean island of Saba, the Juancho E. Yrausquin Airport has the shortest commercial runway in the world, checking in at just 1,299 feet.

This runway, located in the British territory of Gibraltar, is surrounded by water at both ends. And oh yes, residential buildings, civilian traffic, and the Rock of Gibraltar to the sides. Largely considered one of the scariest runways on which to land and take off, the runway at Gibraltar International Airport has the unique distinction of actually running across a four lane city highway.