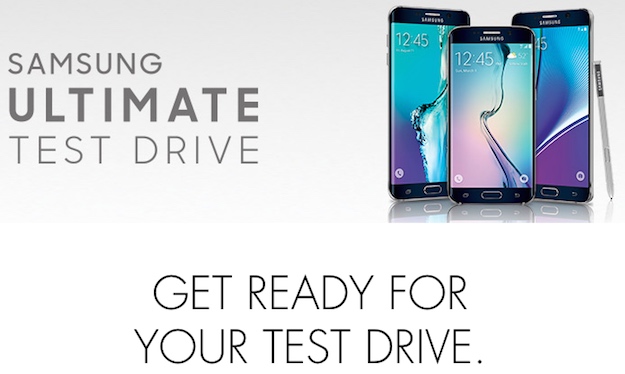 Samsung today launched an intriguing and aggressive new promotional campaign specifically targeting iPhone users. Touted as the Ultimate Test Drive, Samsung’s promotion offers existing iPhone owners the ability to try out one of Samsung’s more advanced devices for 30 days for just $1. The three devices eligible for the trial run include the Galaxy S6 edge+, the Galaxy Note 5, and the Galaxy S6 edge

“For just one dollar, you can try one of our latest Samsung phones for 30 days with no obligation,” the campaign reads. “Your test drive kit will come with the phone of your choice, an activated sim card, and a step-by-step guide to help you start your test drive.”

While Samsung has long made fun of iPhone users in their commercials, this new campaign represents the most overt effort from the South Korean tech giant to actively encourage iPhone users to make the switch.

To take advantage of the offer, interested users must first visit SamsungPromotions.com from their iPhone. Next, users are prompted to select their current carrier and the device they’d be interested in taking for a spin. Following that, users must enter in some standard personal information, including their email address, phone number, birthday, and current address. Once that’s accounted for, users are prompted to enter in their credit card information for billing purposes. Here, Samsung notes that users will only be charged a $1 processing fee. Be careful, though, as anyone who signs up for the promotion will be charged “the full retail price of the phone” if they don’t return it within 30 days. The last thing anyone needs is an unexpected multi-hundred dollar charge on their monthly credit card statement.

So is this an intriguing deal? Absolutely, and so long as you don’t forget about the 30 day window, it may very well be worth checking out.

This interesting promotional deal comes at a time when Samsung is doing all it can to inject a bit of life into slumping and disappointing smartphone sales. Despite what appeared to be generally positive reviews for bot the Galaxy S6 and S6 Edge, cumulative sales of both devices have been underwhelming and haven’t been able to bolster the company’s bottom line. When Samsung reported its earnings this past July, it marked the fifth consecutive quarter the company reported a decline in profits. Tellingly, Samsung’s overall profits dropped by about 8% year over year while the company’s mobile division saw its profits plummet by a whopping 37.6%.

Update: BGR has learned that all of the three devices available through the promotion are sold out.