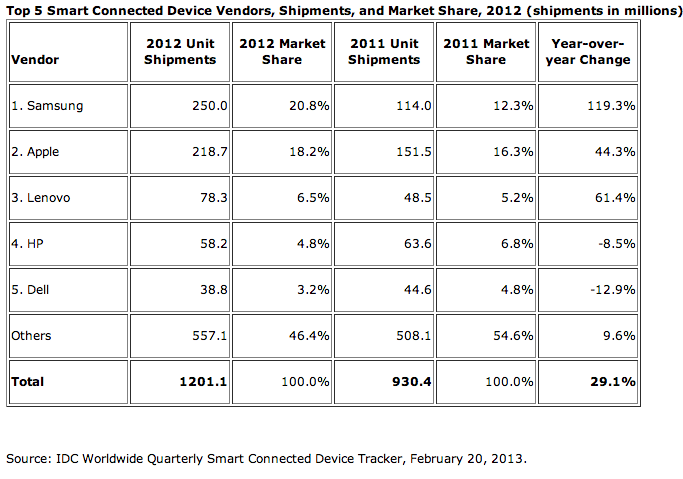 In case you needed any more evidence that 2012 was the Year of Samsung (005930), consider the latest research from IDC showing that shipments of Samsung “smart devices” — which IDC defines as smartphones, tablets, laptops and desktop computers — totaled 250 million units in 2012, an increase of over 119% from the 114 million devices the company shipped in 2011. This impressive growth vaulted Samsung ahead of Apple (AAPL) — which shipped an estimated 219 million smartphones, tablets, laptops and desktops on the year — and made the South Korean electronics manufacturer the world’s leader in smart device shipments.

However, IDC analyst Bob O’Donnell says that the release of the iPhone 5 and the iPad mini helped Apple gain some momentum back in the fourth quarter of 2012, so it’s possible that the two companies could again seesaw in 2013.

“The fourth quarter market share numbers showed a fairly dramatic resurgence for Apple,” he explains. “After falling well behind Samsung early in 2012, Apple came roaring back in final quarter of the year thanks to its latest hits — the iPhone 5 and the iPad Mini — and reduced the market share gap to less than a single percentage point. The question moving forward will be whether or not Apple can maintain its hit parade against the juggernaut of Samsung.”