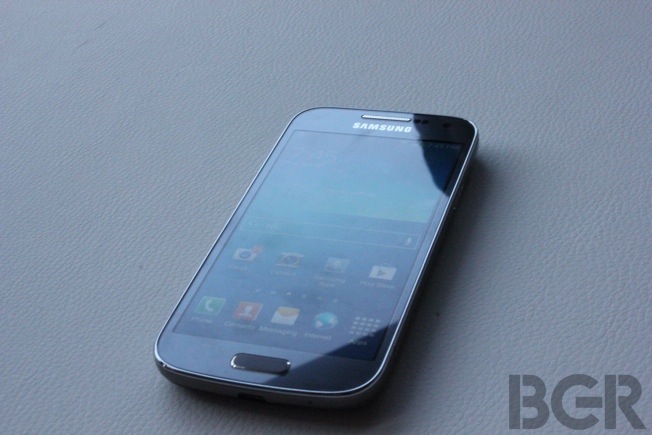 The Galaxy S4 mini is a watered-down version Samsung’s flagship smartphone. It isn’t a slouch by any means, however. The handset is equipped with a 4.3-inch qHD display, a 1.7GHz dual-core processor and an 8-megapixel rear camera. It also includes 8GB of internal storage, 1.5GB of RAM, a microSD slot and a 1,900 mAh battery. The mini feels surprisingly good in hand, and, to be honest, I forgot how nice it was to actually use a device that isn’t designed for Andre the Giant.

The handset is running the latest version of Android and is layered with Samsung’s TouchWiz user interface. It features a lot of the goodies from the bigger Galaxy S4, such as S Translator, Samsung Hub, S Travel, S Voice, S Health. It doesn’t include the Galaxy S4’s more innovative features, however, such as Smart Scroll and Smart Pause.

Pricing is “still up in the air,” but with an aggressive entry-point the GS4 mini could be very appealing.

We also spent some time with the Galaxy S4 Zoom, which is, to put it lightly, what happens when you mate the body of the Galaxy S4 with the backside of the Galaxy Camera. The Zoom is equipped with a mediocre 4.3-inch 960 x 540-pixel display and a 1.5GHz dual-core processor. The selling point is its camera, however. The Zoom is the first smartphone to feature a 16-megapixel rear camera with a CMOS sensor and 10x optical zoom.

The images we took with the Zoom where decent, although they weren’t good enough to warrant using it as a daily device. I would much rather have a high-end smartphone — such as the Galaxy S4 or iPhone 5 — that can also take impressive photos, rather than a mid-level device with a great camera.