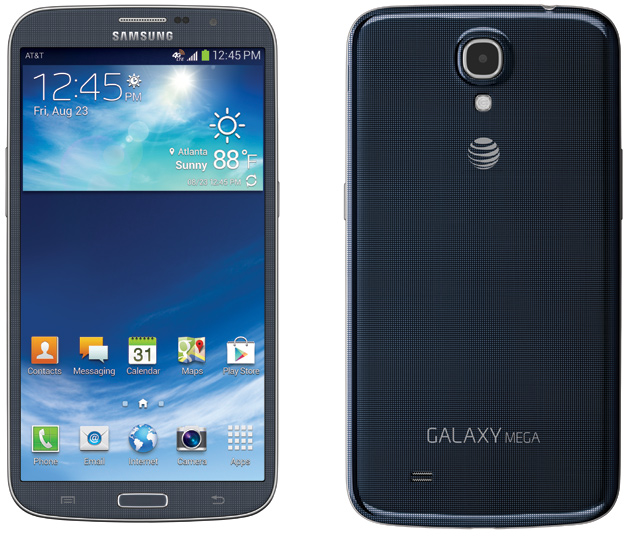 Samsung’s most massive phablet to date, the Galaxy Mega 6.3, will debut on AT&T and other wireless carriers in the U.S. later this month. Following Samsung’s announcement that the Mega 6.3 would be available in the U.S. from AT&T, Sprint and U.S. Cellular beginning later this month, AT&T announced that it will launch the new 6.3-inch smartphone on August 23rd for $149.99 on contract. AT&T will also offer the phablet for $24 per month as part of its AT&T Next plan. Samsung’s Galaxy Mega 6.3 features a dual-core 1.7GHz processor, Android 4.2 Jelly Bean, a 3,200 mAh battery and an 8-megapixel camera along with its 6.3-inch display. AT&T’s full press release follows below.

Beginning August 23, you will be able to enjoy the functionality of a smartphone with the viewing ease of a tablet.  AT&T* will be the first carrier in the U.S. to offer the Samsung Galaxy Mega™ for $24 per month with AT&T Next or $149.99 with a two-year agreement.  The 6.3-inch device is the ideal hybrid handset if you want to experience smartphone portability with the immersive experience of a tablet.  To see the Galaxy Mega’s features in action, check out this video.

“Continuing our legacy as the first carrier to launch Samsung’s Galaxy series, we’re excited to expand our growing line of Galaxy smartphones with the Galaxy Mega,” said Jeff Bradley, senior vice president – Devices, AT&T.  “Images and web content come alive on the large display, making it easy to stay productive and entertained almost anywhere, all on the nation’s fastest and now most reliable4G LTE network.**”

The Galaxy Mega runs Android 4.2.2 (Jelly Bean) and includes many of the popular Galaxy smartphone features:

AT&T recently launched AT&T Next, a new program that gives you the chance to get a new device every year.  AT&T Next is simple and easy to use.

This device earned five out of five stars on AT&T’s Eco-Rating system – the system’s highest achievement. The system, which rates the environmental factors of AT&T branded handset devices, was created to empower consumer choice around sustainability. For more information about this device’s rating, AT&T’s Eco-Rating System, and how you can join AT&T in making a difference, please visit http://att.com/ecospace.