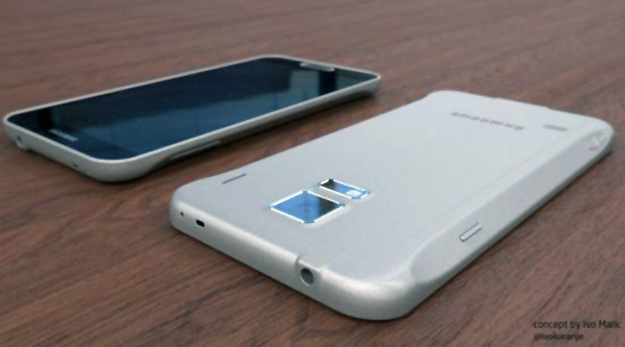 What if Samsung launched a smartphone constructed from thin but sturdy aluminum instead of cheap-feeling plastic? What if that sleek metal smartphone also featured a design that was unique and interesting instead of the same old bland slab design? Such is the vision of graphic designer Ivo Maric, who recently created a concept render of the “Galaxy F,” a premium Samsung smartphone that has been rumored to be in development since the middle of last year.

Maric’s Galaxy F features an aluminum enclosure and a huge display that stretches almost to the side edges of the phone. And unlike most smartphone concepts, Maric’s Galaxy F is actually designed with reality in mind, featuring styling and dimensions that fall within the realm of possibility.

Rumors in the months leading up to Samsung’s recent Galaxy S5 unveiling suggested that the company is working on a premium version of its flagship smartphone dubbed either Galaxy F or Galaxy S5 Prime. The phone never materialized during Samsung’s press conference in February, but reports suggest that the handset is still in development.

According to most reports, the Galaxy F features specs that closely match the Galaxy S5, but packed into a premium metal enclosure similar to those found on the iPhone 5s or HTC One. The device may also include a quad HD display that will pack twice as many pixels as a 1080p screen into the same space.