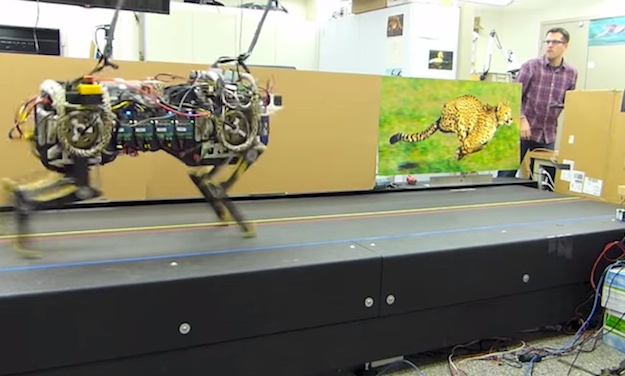 The stuff that’s going on in the robotics world these days is absolutely mind blowing. Of course, we’d be remiss if we didn’t mention the incredible work being done by Boston Dynamics (now owned by Google), what with their impressive fleet of robotic creations that can walk upright like humans, do pushups, and even reach speeds as fast as 28.3 miles per hour in a full on sprint. And, of course, there’s Asimo, the robot from Honda that becomes more human-like with each passing year.

Sometimes, though, the advancements we see in robotics can be a little bit alarming. Case in point: take a look at the following video from the MIT Mechanical Engineering Biomimetic Robotics Lab.

It’s one thing to see a robotic cheetah running at a fast clip, but now they’ve become “smart” enough such that they can even jump over obstacles mid-run thanks to advanced sensors and complex algorithms.

In a leap for robotic development, the MIT researchers who built a robotic cheetah have now trained it to see and jump over hurdles as it runs — making this the first four-legged robot to run and jump over obstacles autonomously.

But enough chatter, here’s the video, impressive as all can be.