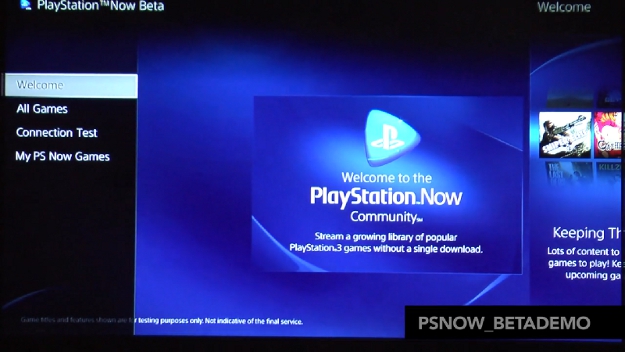 PlayStation Now hasn’t received much fanfare since its reveal in January. Despite the implications of on-demand console gaming without hard drive space concerns or huge downloads, the anticipated feature has been put on the back burner as new game releases take precedence. PlayStation Now is still only accessible to a select group of beta testers, but one of those testers has gone out of the way to leak a video showcasing the service that Sony plans to introduce later this year. We’ve seen leaked footage of PlayStation Now before, but never as clear as this.

As you can see in the video, the user interface for PlayStation Now looks very similar to the UI for the PlayStation Store. The Welcome tab highlights recent and popular games, Connection Test checks to see if your network is capable of streaming games, My PS Now Games lists all the games you have access to (including expiration dates for those games) and All Games gives you a look at every game available on the service.

Starting a game is as simple as pressing play. PS Now will authorize your account, test your connection and load the game. The tester plays through a few moments of Puppeteer and Saints Row: The Third, both of which appear to run smoothly on PS Now. When quitting out of a game, the tester is presented with a short survey asking for a rating of the video quality, audio quality and responsive of the game.

Click the link in the source section to see the video.