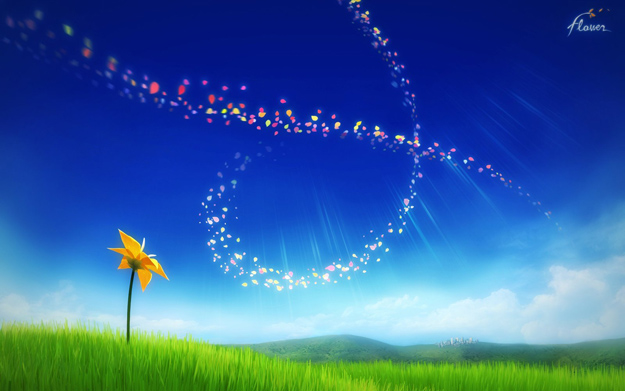 The highest-rated game for Sony’s next-generation PlayStation 4 console isn’t Killzone Shadow Fall or Thief. It’s not a blockbuster game with a multi-million dollar budget. Instead, as noted by Gamer Headlines on Monday, it’s a fun, whimsical and somewhat confusing title that many of you probably haven’t even heard of.

Independent game developer Thatgamecompany first released “Flower” for the PlayStation 3 back in 2009. The curious title, which some critics say isn’t even really a video game, has amassed a sizable fan base — and the PlayStation 4 version, as it turns out, has managed a score of 91 on Metacritic.

Here’s a description of Flower from Gamer Headlines:

Upon selecting one of the game’s six levels to partake in, the game brings you to a large, open area (typically in a field) and presents you with a single flower petal. You are then left to guide it via the wind on a journey of land beautification. The most initially striking feature of the game is that it is controlled strictly by tilting and rolling the DualShock controller, which allows you to change elevation and direction. As you complete the goals that the game gives you for the level (there is no immersion-breaking tutorial or guide arrow to be seen), you continue to add more flower petals to your arrangement, which grows into an even more beautiful and powerful force of nature.

Another feature of the game is that it does not offer the player any form of dialogue or written story. Instead, it is up to the player to piece together the narrative and story arc on their own. In a world where we typically expect our hand to be held to some degree, Flower makes no attempt to intrude on your own interpretation of the game’s overall meaning.

Flower is followed by Rayman Legends in the No. 2 spot on Metacritic’s list of top PlayStation 4 games. FIFA 14, Battlefield 4 and The Pinball Arcade round out the top-5.