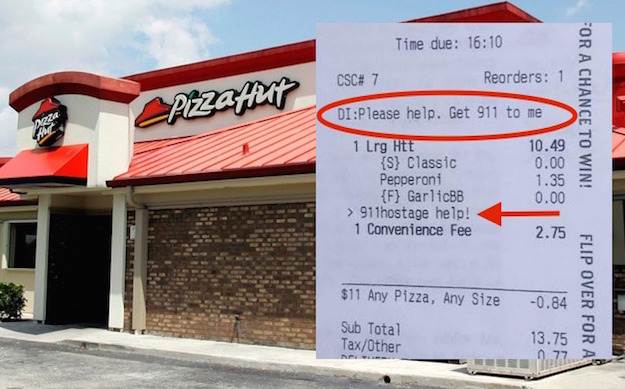 In an incredible story of MacGyver-esque ingenuity, a Tampa Bay woman named Cheryl Treadway used Pizza Hut’s mobile app to discreetly ask for help after her and her children were taken hostage by her husband, one Ethan Nickerson.

Armed with a knife, Nickerson took away Treadway’s cellphone, only to give it back to her temporarily after she slyly convinced him to let her order some food from Pizza Hut.

DON’T MISS: Everything we think we know about the iPhone 6s

With her smartphone in hand, Treadway fired up the Pizza Hut app and placed an order. Cleverly, Treadway added a special message in the “comments” or “special instructions” section that typically accompanies online order forms.

There, Treadway included a note asking that someone call 911 for her, while indicating that she was being held hostage.

Thankfully, the Pizza Hut manager who first saw the online order recognized Treadway as a frequent customer, thereby ensuring that her plea for help wasn’t casually discarded as a prank.

The Pizza Hut manager subsequently called the authorities who showed up to Nickerson’s residence about 20 minutes later and arrested him. He’s now being charged with aggravated assault with a weapon without intent to kill, battery, false imprisonment and obstructing justice by depriving communication to law enforcement.

According to WFLA News, “deputies believe Nickerson may have been high on Meth at the time of the hostage situation.”