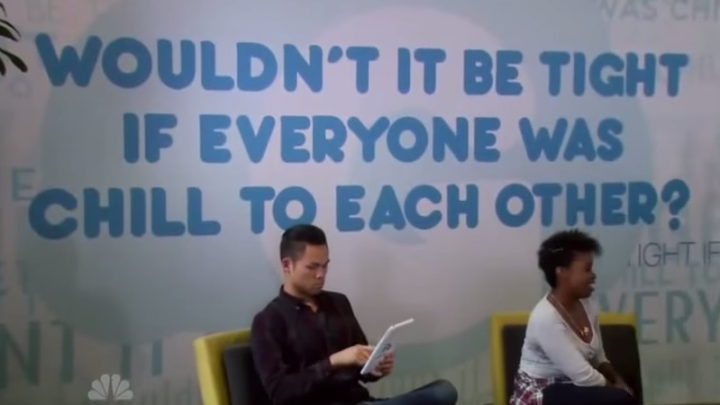 Parks and Recreation has been revitalized in its seventh and final season on NBC and one of the show’s best running gags throughout the season has been its brutal satire of Google.

RELATED: How much am I willing to let Google stalk me?

For those of you who haven’t been watching, the show’s fictional town of Pawnee, Indiana has been invaded by a Silicon Valley tech company called Gryzzl that’s trying to set up a new mega-campus in town. It doesn’t take long for residents to realize, however, the Gryzzl is mining their data and is practically stalking them wherever they go.

People in Pawnee start getting suspicious of Gryzzl once it sends drones to their houses to deliver them gift packages filled with assorted things they’ve searched for online, as well things they’ve written about in their emails and text messages. Even resident libertarian Ron Swanson, who is normally reluctant to criticize private businesses, thinks Gryzzl has gone too far when they send his four-year-old son a box of gifts based on things that his wife had written about him in emails.

One Grizzyl exec, who reminds us of a younger, more shaggy-haired version of Larry Page, tells Parks star Amy Poehler that “There’s nothing scary about Gryzzl! I mean, we just want to learn everything about everyone, and track them wherever they go and anticipate what they’re about to do!”

Check out one clip of Parks and Recreation’s hilarious roasting of Google below.