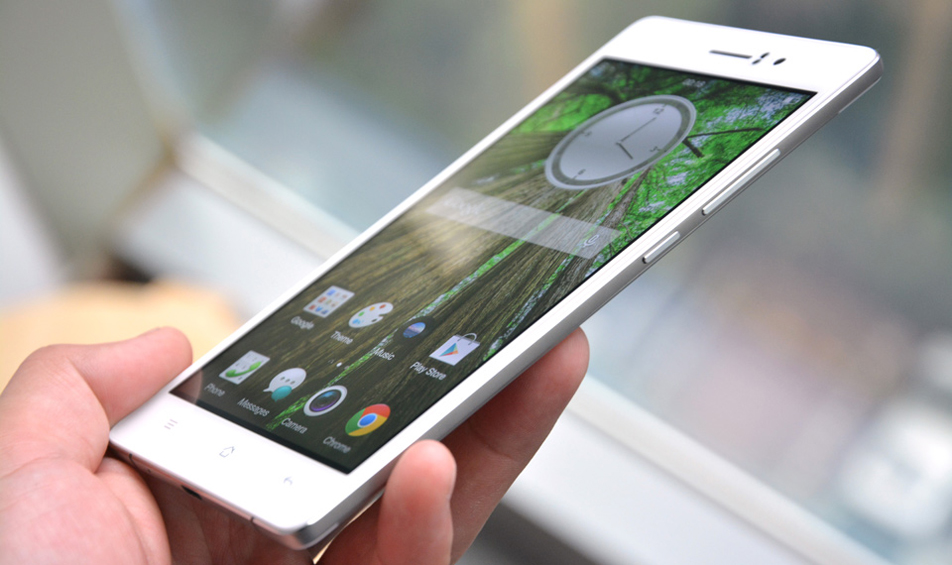 When it comes to smartphones, thin is in. Apple’s iPhone 6 wowed consumers when it was unveiled last month and it measured just 6.9mm thick. The phone feels incredible in the hand thanks to its slender profile, but a new smartphone just announced on Wednesday makes Apple’s latest iPhone look positively plump.

DON’T MISS: Preview: Hands on with the most surprising phone of the year, Motorola’s Droid Turbo

China-based smartphone maker Oppo isn’t a well-known brand in the United States or in many other major smartphone markets. The company has been building impressive handset for many years, however, and on Wednesday it showed off its latest and greatest devices to tech bloggers and journalists.

Among the new phones it debuted was the Oppo R5, a shockingly thin smartphone with a big display and solid specs.

The Android-powered Oppo R5 isn’t a phone you’ll see very often in the U.S., if at all. For the foreseeable future, however, it has the distinct honor of being the thinnest smartphone on the planet.

At just 4.85mm thick, Oppo’s new R5 is about 30% thinner than Apple’s iPhone 6. And despite its ridiculously slim stature, it features fairly impressive specs that should make it a capable upper mid-range device. Key Oppo R5 specs include a 5.2-inch full HD AMOLED display, a 64-bit octa-core Snapdragon 615 processor, 2GB of RAM, a 13-megapixel rear camera, a 5-megapixel front-facing camera, 16GB of storage and a 2,000 mAh battery.

The R5 will launch in a familiar color palette — silver, gold and gray models will be available — beginning in December of this year. The phone will cost $499 off contract, but you’ll likely need to visit eBay or find a good online cell phone importer if you want to buy one.

For additional images of the Oppo R5, visit Engadget by following the link down in our source section.