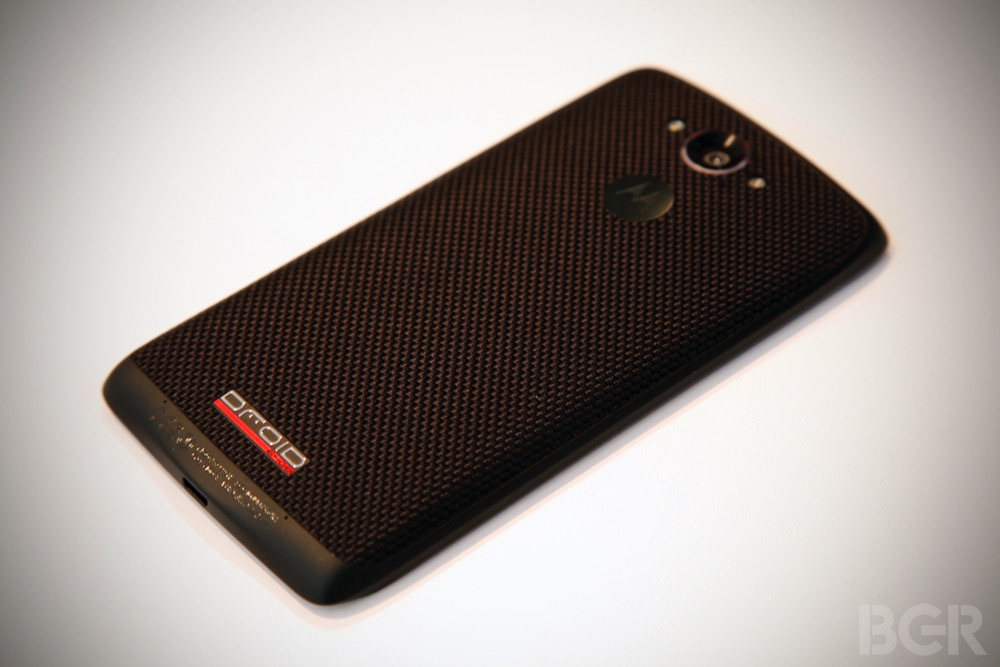 Motorola’s new Droid Turbo came from out of nowhere when it first leaked last month, and now the handset is official. We have repeatedly referred to it as the surprise of the fall season and now that it’s here, everything we knew from leaks and rumors that began trickling out just a short while ago has been confirmed: Motorola and Verizon Wireless’ new Droid smartphone is an absolute beast.

Following the device’s unveiling during a Verizon press conference on Tuesday, I spent some time with the new Droid Turbo to see how it stacks up against the competition.

Beginning with the first-generation Moto X and Moto G smartphones last year, Motorola executed a major strategic shift. Instead of focusing on bleeding-edge specs and sharp, masculine designs, the company began to focus on affordability, value and personalization features.

Motorola still hasn’t gotten its groove back in terms of profitability, but the first Moto G was the company’s best-selling smartphone of all time and the Moto X received nearly universal critical acclaim.

Then in 2014, the company continued on the same path, launching dramatically improved Moto G and Moto X models that stuck to the same formula. The new Moto G is remarkably capable for such an inexpensive phone, and the second-generation Moto X isn’t just better than the first version, it’s the best Android phone in the world.

But of course, neither phone could claim to be the fastest or most powerful in its class.

Fast forward to October, and two new Motorola smartphones have now been unveiled, both of which are class leaders in terms of specs on paper. The Motorola-built Nexus 6 sports a 6-inch quad HD display, a 2.7GHz quad-core Qualcomm Snapdragon 805 processor, 3GB of RAM, 32GB of storage, a 13-megapixel main camera, a 2-megapixel front-facing camera, a 3,200 mAh battery and “pure” Android 5.0 Lollipop.

Now, to complement that monstrous Motorola phablet, we have the new Droid Turbo.

This Verizon exclusive features specs that are quite similar to the Nexus 6, but in a slightly more manageable package. The display still sports quad HD resolution, but it measures 5.2 inches diagonally instead of 6 inches. For those wondering, that works out to a staggering pixel density of 565 pixels per inch.

That said, the handset is slightly thicker than the Nexus 6 thanks to its massive 3,900 mAh battery that provides battery life of up to 48 hours per charge, according to Verizon and Motorola. We’ll see if the phone really measures up to the companies’ claims when we review it in the coming days.

Motorola’s new Droid Turbo also includes the same 2.7GHz quad-core processor as the Nexus 6, along with 3GB of RAM to help ensure that operation remains smooth even under a heavy load. In our brief time with the phone on Tuesday, the device didn’t stutter or stammer once.

Other key specs include a 21-megapixel rear camera that can record 4K video, 32GB of internal storage and Android 4.4.4 KitKat.

As far as build and materials go, phones in Verizon and Motorola’s Droid lineup have always been among the leaders in this crucial area. The Droid Turbo continues Motorola’s tradition of solid Droid-branded phones that feel premium, though it’s not quite on the same level as the iPhone 6 or even the new Moto X with a wood or leather back.

The new ballistic nylon on the black Droid Turbo model has an awesome feel to it and the metalized glass fiber on the red model has a nice feel to it as well. Both materials grip well so the phone certainly won’t slip out of your hand, but it doesn’t feel quite as nice as aluminum or other high-end materials.

Also of note, both Droid Turbo models are water-resistant, which is hugely important.

We’ll have plenty more to share on the Droid Turbo in our full review, which will be published in the coming days. In the meantime, be sure to check out our Droid Turbo photo gallery.

Motorola’s new Droid Turbo will be a Verizon exclusive in the U.S., and it will go on sale on October 30th starting at $199.99 on contract for the 32GB model and climbing to $249.99 for the 64GB version. Those prices include a new program that will allow Droid Turbo owners to replace a device with a cracked screen one time for free.