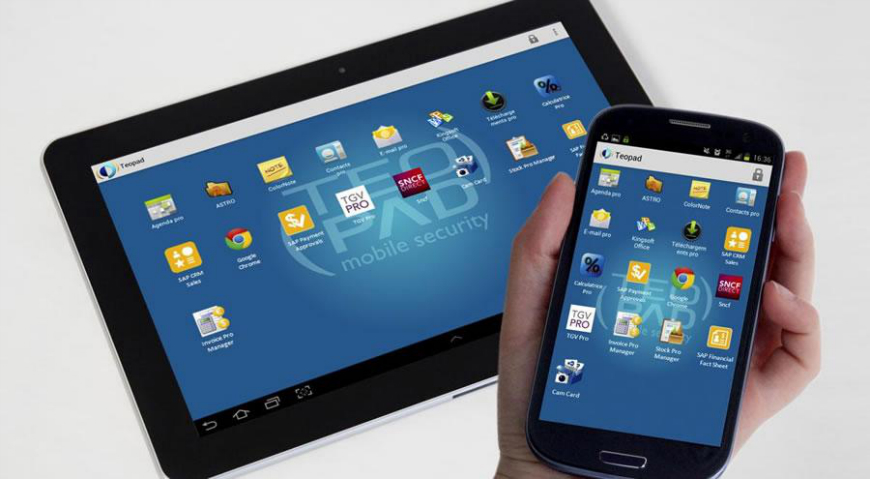 “A crypto war is coming to your pocket,” The Wall Street Journal says in a new report detailing the spy-proof smartphone initiatives of several security companies that have reacted to the many reports detailing the NSA’s worldwide spying operations by creating new, supposedly secure products for companies and government employees.

In France, two companies are working on Android devices that should be more secure to spying attacks than the average mobile offerings found in carrier stores. Bull SA is shipping the Hoox m2 smartphone for €2,000 ($2,760), a smartphone running a re-engineered Android version to “resist hacking and encrypt calls.” The following video further details the Hoox m2, a device that employs a fingerprint sensor.

Thales SA is taking a different approach to securing mobile devices, by releasing an enterprise software system called Teopad that’s supposed to work on existing consumer Android smartphones and tablets (top image), and virtually separate them in two: “one side for personal use, and the other encrypted for sensitive business applications,” something Samsung is already trying to achieve on its mobile devices with the Samsung Knox software. One Teopad license sells for “hundreds of euros,” and the software is based on technology from the company’s military-grade phone called Teorem, already used by 14,000 top civilian leaders in the country and French armed forces. French president Francois Holland is also rumored to use one such device.

Other companies around the world are taking a similar interest in securing mobile communications, including U.S.-based messaging app Wickr and Silent Circle, whose mobile app offers encrypted mobile calling and messaging services, or German-based GSMK, a company that sells its own Android-based CryptoPhone models.

According to research firm Infonetics, cited by the Journal, the market for security mobile software was expected to grow 38% in 2013 to $1.33 billion, and hit $3 billion by 2017. However, while companies are already working on delivering more secure devices, it’s not clear whether the encryption they’re using at the hardware or software level will be spy-proof.

“Using privacy applications and specialized hardware is a positive step, but it isn’t a silver bullet,” information security consultancy Azimuth Security’s director Mark Dowd said. “It is possible to be secure, but it is difficult because phones do so much stuff.”