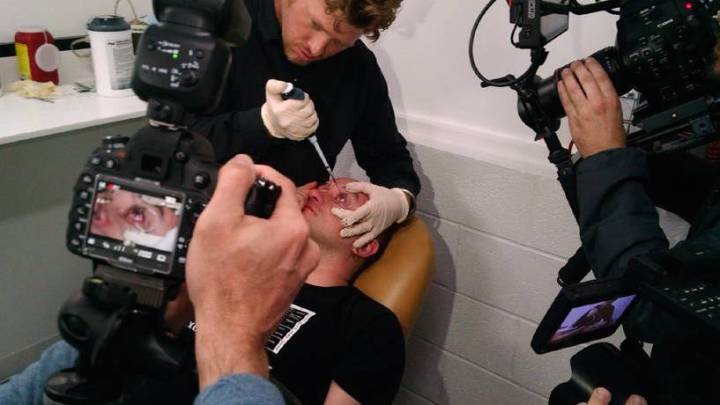 A group of biohackers based out of California recently developed eye drops which, when inserted into the human eye, provide users with some semblance of night vision. According to researchers over at Science for the Masses, a human test subject injected with the eye drop solution was not only able to make out shapes and sizes from 10 meters away, but was also able to locate individuals outside in the dark from a distance of 50 meters.

The main ingredient in said eye drop solution is called Chlorin e6, a substance which comes from sea creatures and is sometimes used as a cancer fighting agent. The test subject, naturally, was the team’s biochem researcher, a man named Gabriel Licina. Interestingly enough, once the solution was put in his eye, Licina put on darkened contact lenses as to avoid being overexposed to light.

While this is undeniably cool, it’s not without some risk, as the research team readily concedes.

In a review paper, SftM say the substance – Chlorin e6 – had before been used as a therapy agent in cancer treatment, as the light amplification properties are used to destroy cancerous cells by harnessing energy from a low power light source.

They also warn in the paper that the application of Chlorin e6 could cause damage to the cellular structure of the eye.

“It’s more like dark became dim, everything was a little brighter. Not a crazy noticeable light, burning and doom, but more a subtle, ‘oh I can see a thing!’”