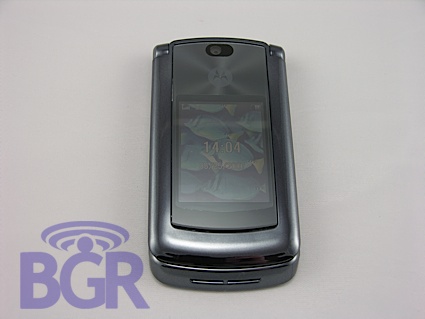 Well look what we finally got our hands on! The Motorola RAZR 2 in all it’s shiny, JUIX glory. The particular model we are covering is the V8 which features quad band GSM/EDGE and is a little thinner than it’s V9/V9M brethren. In addition to the countless upgrades over the original RAZR, (did you even have to ask?) the updated model truly looks like something you want to rock with! The whole “oh look its a touch screen on the outside flip” thing is a little incorrect because only the lower portion is usable. Also the touch haptic “feedback” is merely the phone, how can I say this…vibrating when you touch it? Insert endless jokes here. The now standard 2 megapixel shooter does the job, and the speakers sound really clear even displaying some pretty good low end reproduction. I might be wrong about this, but it looks like the web browser is a custom version of Opera, and it does a great job at displaying web pages. Do you have the hunger for more? No problemo, just follow the magic rabbit below to the official gallery!

Jump on over to the Motorola RAZR 2 hands on gallery!