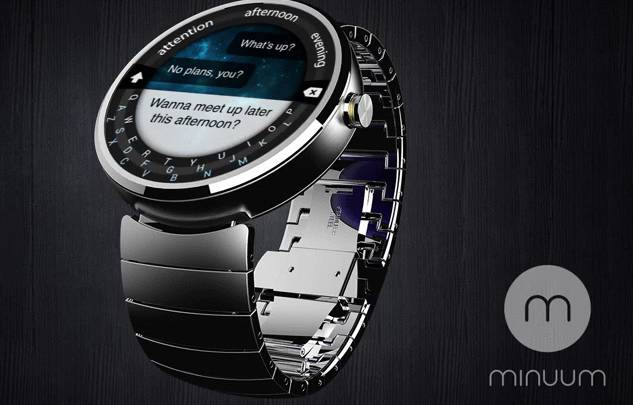 The Moto 360 is one of the most hotly anticipated smartwatches of the year, with Google expected to share more details about it, and about other Android Wear devices from LG and Samsung, on Wednesday. While the smartwatch has yet to hit stores, Minuum already has an awesome keyboard app waiting for the Moto 360 to be launched.

The Minuum keyboard for Android started as an Indiegogo project, which quickly turned out to be a hit. It raised almost $90,000 in funding, or almost 9 times its initial goal.

Minuum is a smart, simple keyboard that occupies much less space on a smartphone display by condensing the keyboard’s rows into a single row, thus offering users more access to the information contained in rest of the screen.

The company is apparently following the same principles in designing a keyboard for a wearable device with a circular screen such as the Moto 360, with the keyboard app occupying only the edges of the display.

“As smart watches have evolved, one of the most appealing designs that we’ve seen is the round-faced Moto 360,” the company wrote on its blog. “As you may have come to realize from watching our sweet demo videos, Minuum is all about typing anywhere. And what better place for a one-line keyboard than along the edge of a circular watch face?”

Even though Android Wear devices will come with support for voice-based text input, keyboard apps will still be required in various instances, Minuum says. Furthermore, the company is already prepared to let users who own existing Android smartwatches try out its special new keyboard app for wearables.

An image showing how Minuum would work on the Moto 360 follows below.