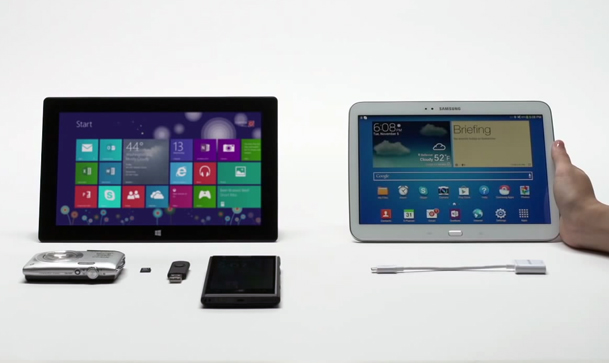 Try as Microsoft might, it just can’t seem to put a dent in iPad sales with its Apple-bashing Surface ads. The company has issued several different ads that deal various jabs at Apple’s popular tablets, but the Windows RT-powered Microsoft Surface has yet to catch on with consumers while iPad sales came in at 14 million units last quarter. So, Microsoft decided to try something new. Since Android tablet sales have been growing far more quickly than iPad sales over the past year, why not start bashing them instead? And so we have Microsoft’s newest Surface RT advertisements, which set their sights on Samsung’s Galaxy Tab 10.1 instead of Apple’s iPad lineup.

While the target of Microsoft’s attack in new, the subject matter is quite familiar. In one ad, Microsoft goes back to the full-size USB port on its Surface tablet, pitching it as a key differentiator while points out that the Galaxy Tab 10.1 only has a microUSB port. In a separate ad, Microsoft shows us how much better the Surface is for sharing among family members thanks to multiple account support and parental controls.

Both ads are embedded below. Will they hit home with consumers a bit better than Microsoft’s iPad-bashing ads and drive Surface sales this holiday season? You be the judge: