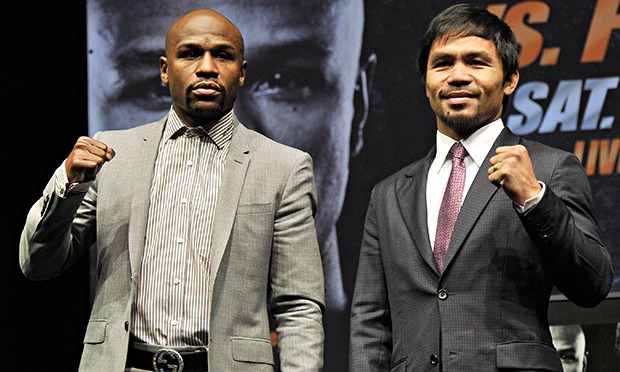 Billed as the “fight of the century,” this weekend’s Mayweather vs Pacquiao fight was undoubtedly the biggest sports event of the weekend, an impressive feat given the ongoing NBA playoffs and Saturday’s Kentucky Derby.

While upwards of three million people ordered the pay per view event (at $100 a pop no less), many others were able to stream the site for free via Periscope, the Twitter-owned video streaming app. Indeed, users who opened up Periscope (or Meerkat) on Saturday night couldn’t ignore the myriad of available fight streams even if they wanted to.

I tuned in in the third round and was able to see dozens and dozens of fight streams in the global “live” menu. Tapping into a few streams, it was quickly apparent that some were just standard Periscopes of friends at a fight-night party, while others were focused intently on television sets or computer screens playing the fight in real time.

All of this raises a number of interesting questions regarding pirated media, not to mention Twitter’s plans, if any, to address a piracy issue that likely has broadcasters fuming. But thus far, Twitter seems to instead be relishing in the glory of Periscope’s Saturday night metrics.

And the winner is… @periscopeco

The popularity of Periscope during the Mayweather-Pacquiao fight emphatically signals that the sports world has no choice but to play much closer attention to the growing number of ways in which technology is increasingly facilitating the breadth and accessibility of illegal streams.

Speaking to that point, Variety co-Editor-in-Chief Andrew Wallenstein astutely pointed out the following:

Any pay-TV channel that pays billions to sports leagues for exclusive rights to programming is going to be concerned about what went on Periscope during the Mayweather-Pacquiao fight. While piracy via livestream is far from a new phenomenon, it may well have achieved a new level of visibility this weekend.

Indeed, when broadcast networks are writing billion dollar checks to the NFL, the last thing they want is for any ole’ person with a smartphone to be able to watch or create unauthorized streams with ease.  , for instance, forks over an estimated $1.9 billion to the NFL for broadcast rights annually. Furthermore, Periscope might prove to be a haven for soccer loving fans in the U.S. who can’t typically watch certain league matches without adding a hefty sports package to their monthly cable bill.

As a final point, it’s worth noting that this isn’t the first time Periscope has ruffled a few feathers. Just two weeks ago, HBO began sending takedown notices to Periscope after it discovered that a number of enterprising fans had taken to live broadcasting Game of Thrones.