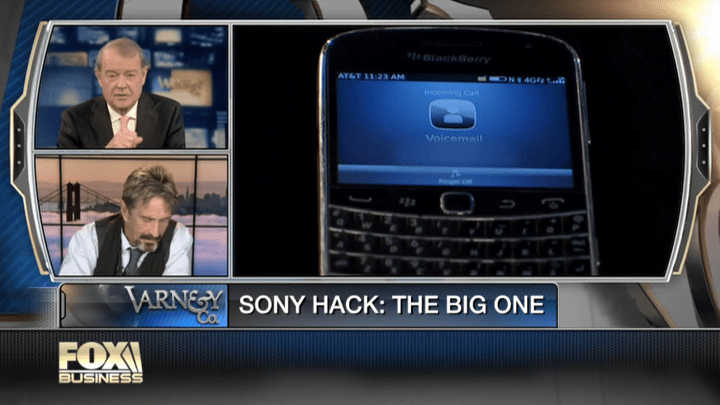 Despite countless reports, investigations and press conferences over the past several weeks, there is still a shroud of mystery surrounding the Sony Pictures hack. We might never know all of the details, but one well-known, eccentric programmer thinks he knows exactly how the hack was initiated — and it’s much simpler than you might have imagined.

John McAfee was a guest on Varney & Company on the Fox Business channel this week to demonstrate how he believes the Sony Pictures hack went down. In a pre-taped segment, McAfee manages to hack into host Stuart Varney’s smartphone, rifle through his contacts and then place a call to Varney’s phone that appeared to be coming from the corporate Fox News number.

McAfee says that the hackers likely used a similar method to get in touch with employees at Sony. They would then imitate FBI agents and request the usernames and passwords of anyone they could reach, claiming that this was a necessary safety precaution in order to guard against potential cyber-attacks.

This is a very different story from what the FBI has told the press. In a testimony last month, the FBI’s assistant director told Congress that this was one of the most sophisticated breaches of all time.

Regardless of how the massive attack was carried out, it’s still fun to see McAfee hack someone’s smartphone on live TV. Watch the full clip below: