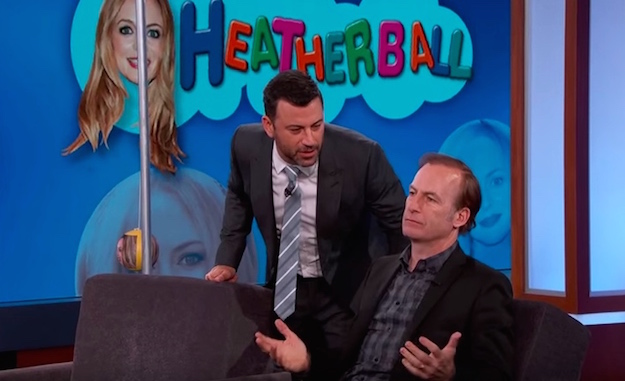 NBC’s The Tonight Show Starring Jimmy Fallon has been a ratings success ever since it debuted back in February 2014. In fact, there are some weeks when Fallon’s ratings are higher than competing late night talk shows on ABC and CBS combined.

Say what you will about Fallon, but the former SNL star has expertly created a more whimsical take on the traditional late night talk show to great success. Whether it’s lip sync battling with Michelle Obama, putting together a near-perfect Saved by the Bell reunion, or partaking in any number of ridiculous games with celebrities, Fallon’s show is seemingly a viral video making machine.

DON’T MISS: Video explains the science behind the Lexus Hoverboard

With actor and comedian Bob Odenkirk appearing as a guest, Kimmel asked and pleaded with Odenkirk to play a ridiculous tether ball game called Heatherball. The game, as you might have guessed, was pretty absurd and simply involved a normal game of tetherball, only with Heather Graham’s face plastered on the ball. As part of the tongue in cheek sketch, Odenkirk was reluctant to play, telling Kimmel that he specifically told his agent that he didn’t want to play any games.

Shots fired? Perhaps. Though as the top rated show on late night TV for many months now, I doubt Fallon cares much either way.