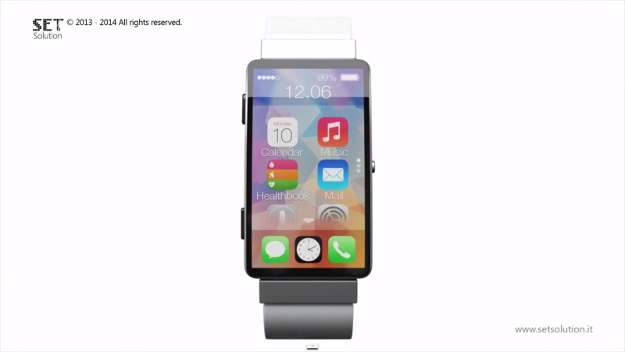 We’ve seen plenty of iWatch concept images and videos over the past several months, but now that we know at least one version of the iWatch’s display is expected to stretch to 2.5 inches, it might be time to re-imagine Apple’s first entry into wearables. SET Solution, the same consulting company that mocked up its own vision of the iPad Pro earlier this year, is back with a concept video of the iWatch that really puts the 2.5-inch display into perspective.

Working with every detail revealed in the latest report from Reuters, SET Solution’s concept features a large, rectangular watch face with a curved glass display and what appears to be a wearable-friendly version of iOS 8, including biometrics, health sensors and Apple’s new Healthbook app. The primary functionality of the device is still unknown, but analysts, pundits and consumers expect that fitness and health will be central to the iWatch.

Comparing SET Solution’s mockup of the iWatch to the LG G Watch or the Moto 360 is an eye-opener — nothing has actually been confirmed in regards to the iWatch, but if it does turn out to be this bulky, Apple might not reach the same audience that has already begun showing interest in Android Wear.

The iWatch is expected to launched this October, shortly after the iPhone 6.