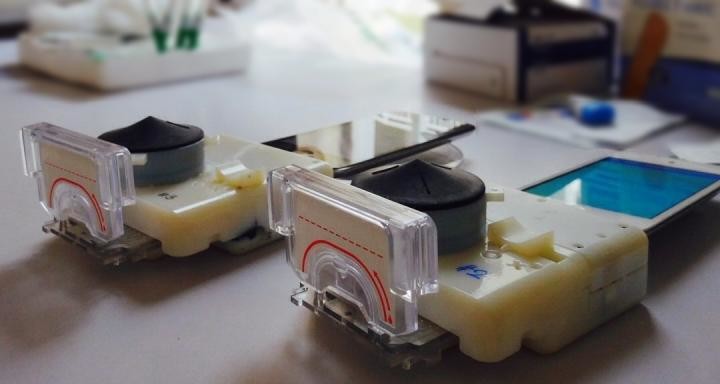 Smartphone accessory makers are continuously trying to convince buyers to spend extra money on iPhone and Android accessories, some more useful than others, including headphones, battery packs, cases and screen protectors, to name just a few of the most popular ones. But none of these products are as useful as a recently revealed iPhone and Android smartphone accessory that might forever change how some critical blood tests are performed.

FROM EARLIER: One more clever way Apple will get you to buy an Apple Watch

As Science Daily reports, researchers from Columbia University managed to turn any smartphone running iOS or Android into a tool that can be used on the field to perform quick HIV and syphilis testing.

The gadget costs $34 to make, which is insignificant compared to $18,000+ that an ELISA machine needed for HIV testing in a lab costs. Even better, the new mobile accessory Columbia created provides almost instant results.

The dongle only requires a drop of blood from a patient, at which point it’ll be able to perform three tests simultaneously, including ELISA for detecting HIV antibodies, treponemal-specific antibodies for syphilis, and non-treponemal antibodies for active syphilis infections.

The accessory connects to an iPhone or Android device using the standard headphone jack, which it uses both for data transmission (to the app installed on the device) and power.

“Our work shows that a full laboratory-quality immunoassay can be run on a smartphone accessory,” associate professor of biomedical engineering at Columbia Engineering and research leader Samuel K. Sia said. “Coupling microfluidics with recent advances in consumer electronics can make certain lab-based diagnostics accessible to almost any population with access to smartphones. This kind of capability can transform how health care services are delivered around the world.”

In addition to being highly portable, fast and energy-efficient, the accessory is also user-friendly, meaning that anyone could rapidly perform tests in the field, particularly in regions of the world where other alternatives aren’t available.

“Our dongle presents new capabilities for a broad range of users, from health care providers to consumers,” Sia added. “By increasing detection of syphilis infections, we might be able to reduce deaths by 10-fold. And for large-scale screening where the dongle’s high sensitivity with few false negatives is critical, we might be able to scale up HIV testing at the community level with immediate antiretroviral therapy that could nearly stop HIV transmissions and approach elimination of this devastating disease.”

A video showing it in action follows below.