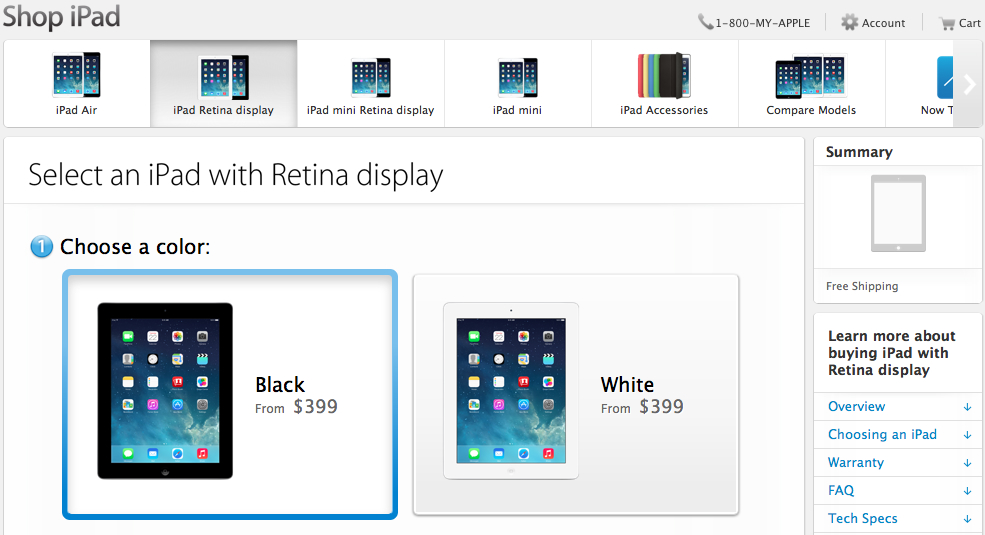 In addition to quietly launching an 8GB iPhone 5c model in certain markets, Apple has also modified its iPad lineup replacing the 2011 iPad 2 with the fourth-generation iPad with Retina display (also referred to as the iPad 4). While the 8GB iPhone 5c may not necessarily a big deal, the addition of the iPad 4 to Apple’s lineup is certainly more interesting, offering users that want a cheaper 9.7-inch iPad a much better machine than the three-year old iPad 2.

The fourth-gen iPad 4 comes with a Retina display (2048 x 1536 resolution), a faster dual-core A6X chip, 1GB of RAM, 5-megapixel camera, 1.2-megapixel front-facing camera and Lightning port. By replacing the iPad 2 with the iPad 4, Apple has ditched the last iPad model still using a 30-pin port that officially sold in its stores. Furthermore, the iPad mini is now the only iPad model still sold by Apple that does not come with a Retina display.

Just like the iPad 2, the iPad 4 will cost $399 for the 16GB version, while the cellular model starts at $529. The iPad 4 will be available in Apple retail stores but also online, with the company having already updated multiple local online stores to show the iPad 4 in its iPad lineup instead of the discontinued iPad 2.