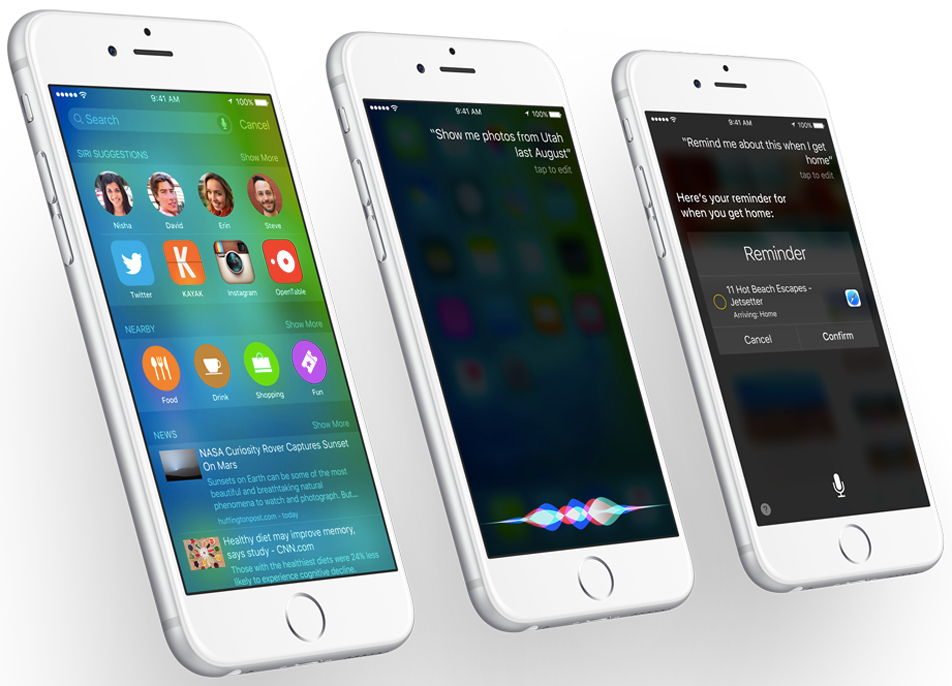 Apple’s iOS 9 is meant to give users a better iPhone and iPad experience while introducing a bunch of new features. At first sight, iOS 9 is generally similar to iOS 8, but Apple made plenty of changes under the hood that will be immediately noticeable to savvy iOS users. In the post that follows, we’re going to show you some of iOS 9’s little new additions that should improve your iOS experience, regardless of whether you’re rocking a new iPhone 6 or an older iOS device.

DON’T MISS: Video: iOS 9 on iPhone 6 – How to install it right now without a developer account

1. New wallpaper. Maybe not a must-have feature in iOS 9, but the first beta already includes a new wallpaper.

2. New widgets: battery life and Find My Friends. You can now enable widgets to show you battery life status across your devices regardless whether Low Power Mode is enabled or not. Similarly, Find My Friends will show you where your friends or family are directly inside the notification shade, as the app is now built into iOS 9.

3. Better lock-screen protection: 6-digit passcode. Starting with iOS 9, the default passcode is made of six digits rather than four, which should make unlocking it by brute-force attacks a lot tougher.

4. New multitasking view. In iOS 9, there’s a new task switcher on the iPhone and iPad — see the iPhone version below.

5. Siri Proactive is found by swiping to the left on the home screen. That’s where you’ll find suggestions for people, apps and nearby places. The image below shows you just nearby places and new tips from Siri — the beta version doesn’t always show contacts, a bug that’ll likely be fixed

6.Siri has a new animation, one that’s more in line with Siri on Apple Watch.

7. Mute / orientation lock. The option is no longer available only on the iPad, and you’ll find it on any iOS regardless of screen size.

8. Search in Settings. Yes, you can finally search in the Settings app, which should help you find the setting you want to change faster than before.

9. Notifications can be grouped by app if you so desire thanks to a new Settings option, as seen below.

10. Back to app. In case a Notification comes in while you’re in an app, you’ll now be able to get back to your app faster than before after dealing with it. Say a message comes in while you’re playing Hearthstone. You can reply to the message in Messages, then click the “Back to Hearthstone” button that appears where your carrier name would otherwise be.

11. Shift button fix. Speaking of messages, Apple has totally fixed that Shift button mess. Above, you can see the Shift button isn’t pressed as all letters are shown in lower case. Below, with Shift pressed inside the Notes app, the letters are all in upper case.

12. Low Power Mode. You can now enable this battery-saving feature on your iOS device from Settings. When that happens, the battery color on all screens turns from green or red to yellow, as seen below. A prompt will also tell you what the iPhone will stop doing when the mode is enabled.

13. New video recording options. In the Photos & Camera section of Settings you’ll be able to customize the type of video and slow-mo video you want to record, when it comes to resolution and frames per second (see below).

14. Photos carousel. Inside the photos app, when looking at an app you can now see a carousel at the bottom containing your most recent pics (in this case, you can see the screenshots above, as taken on an iPhone 6 running iOS 9).

15. Hidden iCloud Drive app — read more about it at this link.

16. Reproductive Health data can now be collected within the Health app.