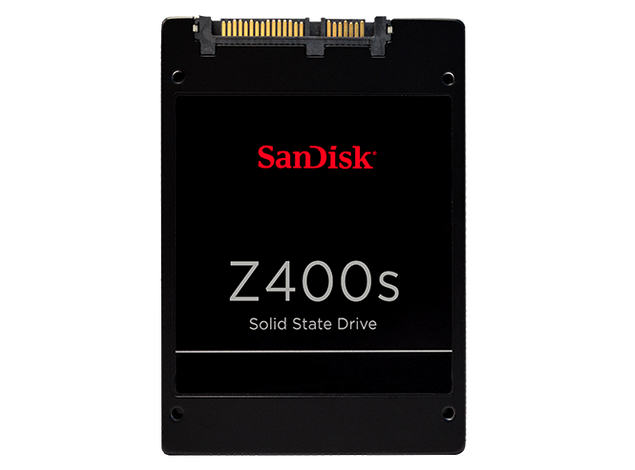 Solid-state drive (SSD) can significantly increase the performance of a computers compared to regular hard-disk drives (HDD), but flash memory has never been the most affordable option for buyers. However, that’s about to change, as SanDisk on Tuesday announced a new family of SSDs that should be as affordable as regular HDDs.

DON’T MISS: The iPhone 7 is already leading to intense competition in the industry

The SanDisk Z400s it the new “cost-effective” SSD announced by the company. The device is supposed to be 20 times faster than HDDs and consume 20 times less power while offering five times better reliability than regular HDDs.

It’s not clear when the Z400s will be commercially available, but SanDisk says that it’s already sampling customers immediately. Pricing details have not been revealed either, and these SSDs might initially be available to OEMs initially, but that’s still good news, as laptops and other devices will in the near future ship with such flash storage on board rather than conventional HDDs.

A video and the full press release follow below.

“The Z400s represents a feat of engineering that addresses the needs of two distinct markets—PC OEM manufacturers and embedded application designers,” said Rizwan Ahmed, senior director of product marketing, client platform solutions, SanDisk. “With a single architecture, SanDisk is able to provide OEMs with an affordable solution for displacing HDDs in today’s cutting edge consumer devices, and help embedded application designers avoid overpaying for un-needed space—all while delivering the peak performance and high-reliability that only SSDs can supply.”

An Economic Way for OEMs to Add Value and Competitive Advantage
With a variety of form factors and capacities, lightweight design and cost-effective architecture, PC OEMs can incorporate the new SanDisk Z400s into sleeker, mobile laptop designs without breaking bill of materials (BOM) costs. Additionally, because SSDs have no moving parts, they are much less prone to failure, which increases device uptime. According to published data, HDDs are three times more likely to fail than SSDs.3 By designing systems with the new SanDisk Z400s SSD, PC OEMs can deliver products that are 5x more reliable and 20x faster than traditional hard drives, translating into fewer returns, lower total cost of ownership and increased overall customer satisfaction.

IDC forecasts that the Intelligent Systems market will ship over two billion units in 2019 with the industrial segments growing the fastest.4 Digital signage, security surveillance, POS or kiosk environments are key areas where SanDisk SSDs can provide major benefits over HDDs, particularly in applications where the storage requirements are relatively short-term—meaning that data is frequently cleared from the device. Thus these applications only require low capacities, but reliability and performance levels are paramount.

• Digital Signage: The rise of big data analytics is driving the use of digital signage for transportation, advertising, retailers and more. The Z400s delivers the latest advances in flash storage technology so that users and manufacturers of digital signage equipment can trust their solution will consistently provide valuable and current information to all audiences.

• POS: Research shows that customers become frustrated after 2.5 minutes if there is no progress in a checkout line; after five minutes, one out of three customers will abandon the line altogether.5 The Z400s provides the performance and reliability that retail, hospitality, restaurant services, and many other industries need to ensure a quality customer experience and inspire brand loyalty.

• Security-Surveillance: The Z400s is extremely beneficial at the point of image capture, where ruggedness, durability and performance are critical, but storage requirements are relatively short-term. This includes digital cameras where images are cleared more frequently, but still operate 24/7 in order to reduce risk, such as in courtrooms or government buildings, healthcare facilities and shopping malls.

Visit SanDisk at World IT Expo 2015, Seoul
See live demos of the new Z400s and SanDisk’s complete portfolio of flash-enabled solutions at booth CB101 3F Hall C in COEX Exhibition Hall during the World IT Show 2015, taking place May 26-27th.

SanDisk Corporation (NASDAQ: SNDK), a Fortune 500 and S&P 500 company, is a global leader in flash storage solutions. For more than 25 years, SanDisk has expanded the possibilities of storage, providing trusted and innovative products that have transformed the electronics industry. Today, SanDisk’s quality, state-of-the-art solutions are at the heart of many of the world’s largest data centers, and embedded in advanced smart phones, tablets and PCs. SanDisk’s consumer products are available at hundreds of thousands of retail stores worldwide. For more information, visit www.sandisk.com.