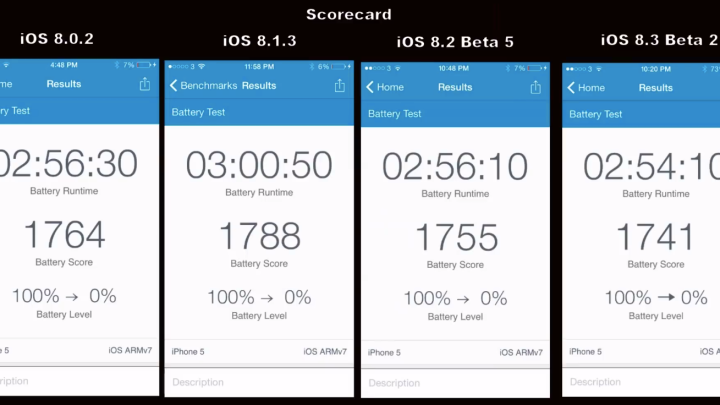 Smartphone owners want it all. We want a display as bright and beautiful as the one on our televisions, a processor that will allow us to run the latest and greatest software, consistent updates to keep the experience fresh and enough apps to occupy us for the rest of our lives. But most of all, we want our phones to last for an entire day on a single charge.

YouTube user kabriolett seems to agree, as a video uploaded on his channel this week puts several of the recent iOS 8 updates to the test. Using the latest version of Geekbench, kabriolett was able to compare the battery life from one update to the next on a clean 16GB model of the iPhone 5.

Here’s how the test was performed:

The results of the Geekbench tests indicate that iOS 8.1.3 has the highest battery score of the four versions. iOS 8.3 Beta 2 has the lowest while iOS 8.0.2 and iOS 8.2 Beta 5 are just about even.

It’s not exactly revelatory, but it’s an interesting look at how battery life fluctuates as Apple tinkers with its software. Here’s the full video: