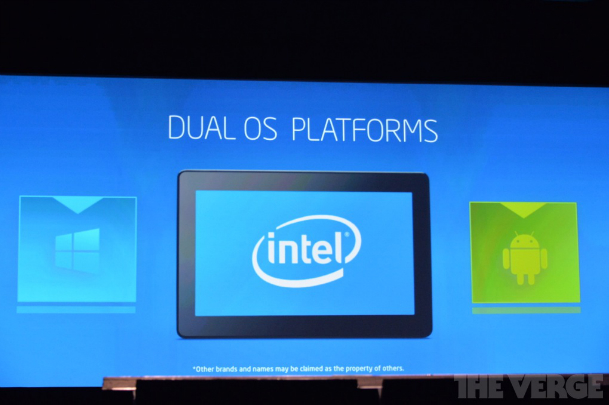 In a “post PC” world dominated by the iPad and Android tablets, Intel seems to be ready to further embrace Google’s mobile platform, especially considering the decline of the traditional PC when it comes to quarterly sales. Intel at CES 2014 confirmed that its upcoming chips will support both Windows and Android, The Verge reports, allowing OEMs to create dual OS devices such as the recently unveiled Intel-based Transformer Book Duet TD 300 convertible tablet/laptop that Asus says is able to switch between Android mode and Windows 8.1 mode in under four seconds. Intel demoed dual OS support on stage during its pre-CES media event, saying that its Intel-based “dual OS platforms” will offer full 64-bit support as well.

In addition to dual Android/Windows devices, Intel will also support a dual Windows/Windows operating mode that will run different operating system versions, one for home and one for Office. Furthermore, Intel has introduced its own Device Protection Technology that will be offered free of charge to Android and other mobile customers, and will include elements of the McAfee mobile security products.