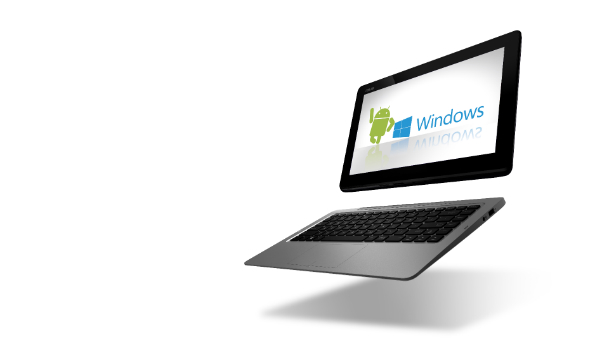 Asus on Monday announced at CES 2014 a new Android tablet that doubles as an Android laptop, triples as a Windows 8.1 tablet and… quadruples as Windows 8.1 notebook – Asus describes the Transformer Book Duet TD300 as the world’s first quad-mode dual-OS laptop and tablet. The company says users will be able to move from Android to Windows 8.1 and vice-versa in just around four seconds, without having to reboot the machine to run the other OS. Asus chairman Jonney Shih said on stage that switch between operating systems is “faster than most supercars’ acceleration.” The company teased a dual-booting device in a video released in the weeks preceding the event.

In order to quickly move between OS states, the Transformer Book Duet uses the Asus-patented Instant Switch technology that allows users to seamlessly switch to a different computing environment by pressing a hardware or virtual button. In terms of specs, the device packs a 13.3-inch touchscreen IPS display with Full HD (1920 x 1080) resolution, fourth-gen Intel Core i3/i5/i7 processor, 4GB of DDR3 RAM, up to 128GB SSD in tablet mode, up to 1TB HDD in Keyboard dock, 802.11 ac Wi-Fi, Bluetooth 4.0, USB 3.0, HDMI 1.4, and 38Whr battery (5 hours of life in Windows 8.1 and 6 hours in Android 4.2.2).

The tablet/laptop combo will launch in the U.S. at the end of March, with prices starting at $599.