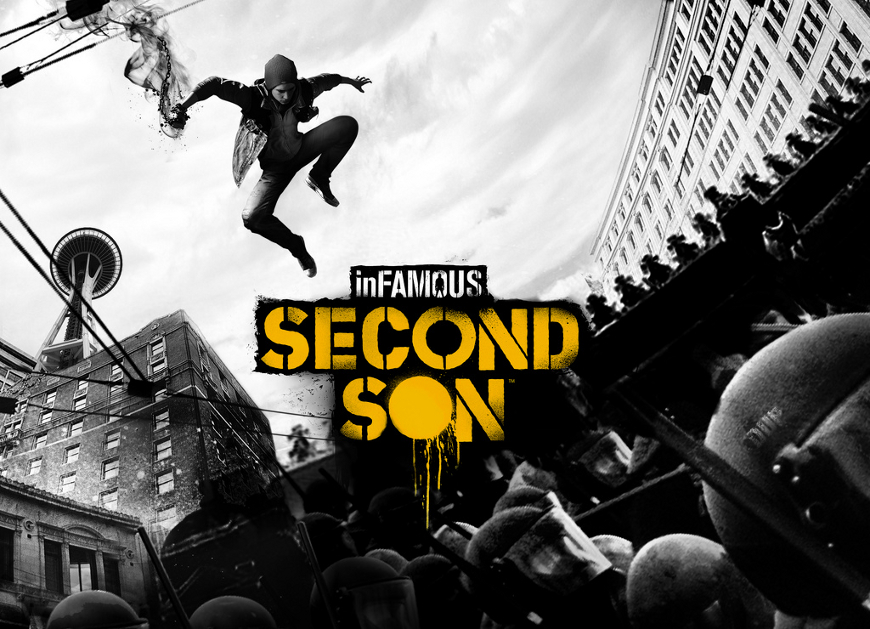 Infamous: Second Son made me want to move to Seattle. The brilliant, yet occasionally frustrating thing about a new generation of consoles is how distracting the visuals can be. The Seattle of Infamous: Second Son is vibrant, gorgeous and impeccably detailed, enough to lure you away from the task at hand to poke around and see just how much effort was put into the creation of this world. When you’re finally ready to get back on track, you’re going to find yourself immersed in the best single-player campaign of any game on the PlayStation 4. But is that enough?

Infamous: Second Son is a third-person, open-world action adventure game, as well as a successor to Infamous and Infamous 2. Second Son takes place seven years after the events of the Infamous 2, introducing players to a new character: Delsin Rowe. Delsin is a Native American graffiti artist with a heart of gold…or of ice, depending on how you choose to play. After DUP (Department of Unified Protection) forces wreak havoc on the people of your community in search of a group of escaped Conduits, it’s up to you to find a way to save them by acquiring new powers.

The game is split into a dozen or so main missions and a wealth of secondary objectives scattered around the city. In order to access most missions, you’ll have to take out the DUP’s mobile command centers which dominate certain regions of the map. These require a strategic approach, as soldiers of all shapes and sizes will swarm your way the moment you begin firing, but it provides a decent challenge as you learn how best to use your powers.

Once you finish off the DUP and dismantle the command center, the missions and periphery goals in that region will be unlocked. The mobile unit itself will also shoot out blast shards, collectible items that give Delsin the ability to upgrade his powers and unlock new ones. You can also find blast shards scattered throughout Seattle, tucked inside flying robots that wind their way around buildings, street signs and lampposts. It’s important to spend the shards as you acquire them — the DUP grows more powerful with every mission you complete.

The missions can take anywhere from a few minutes to over half an hour, but you’ll find plenty to do on your way from one to the next. Around Seattle, you’ll be able to tastefully (or not so tastefully) decorate walls with graffiti, silence anti-Conduit protesters, track down drug dealers and even assault noisy street musicians. Depending on which of these activities you choose to participate in, your good or your evil karma will increase, unlocking access to even more abilities.

The biggest change to the formula in Second Son is the way powers work. Where Cole McGrath was gifted with the ability to control electricity, Delsin takes his powers from other Conduits he meets. After acquiring Smoke from an escaped Conduit, the differences between Cole and Delsin are immediately apparent.

Cole’s powers allowed him to gracefully skate across power lines, climb up walls and hover over rooftops — Delsin’s powers have many similarities, but they also emphasize speed. With Smoke, Delsin can dissolve through fences and shoot up vents to quickly scale buildings. With Neon, he can sprint up the side of any surface in Seattle in seconds. I won’t spoil the final two powers, but let’s just say that my favorite power takes a cue from the Red Bull slogan.

Whichever power Delsin is equipped with provides a different method of combat, although he’s always shooting something from his hands. Smoke is akin to a semi-automatic weapon, firing small pellets as fast as you can pull the trigger (with the occasional reload). Neon fires a single, powerful bolt at a time, but you can zoom in to focus on the opponent’s legs to quickly wrap them up or aim for the head to silence them for good. Even combat decisions can play a role in your karmic alignment, so you’ll have to rethink your strategies if you plan to play through both paths.

When I talked to animation director Billy Harper, he told me that one of the draws of the new powers is that they get players to the action faster. I found it to be a bit of a double-edged sword; although I was never aimlessly wandering around the city, slowly trekking towards my next objective, a lot of the joy of Infamous and Infamous 2 came from sliding across power lines and messing with the populace (or saving them from bad guys) along the way. It was a smart, fun evolution over the Sly Cooper series, and some of that has been lost in translation on the PS4. That said, a newcomer to Infamous should have a blast rocketing around Seattle without the baggage of nostalgia.

Infamous takes its name from the game’s emphasis on choice. Do you want to be remembered as a redemptive hero or a marauding villain? Would you sacrifice your friends to gain power or sacrifice yourself to save their lives? While some games concern themselves with the granularity of those choices, the branches in Infamous are blunt and binding.

Of course, the consequences of your actions won’t always play out as you had intended, which is where the series has traditionally excelled, and where Second Son missed a step for me. My choices never felt as dramatic as they had in the past, and despite asking some tough questions during the finale of the “good” ending, the game wraps everything up with a neat bow, foregoing what could have been a much more complex and thoughtful resolution.

Across the board, this is one of the best video game casts in recent memory, heightened by the performance capture technology that allows Sucker Punch to highlight nuanced emotions through facial expressions. Every cringe, every balk of incredulity, every sly smile (of which there are quite a few) is perceptible, and it’s amazing to watch.

The story, on the other hand, doesn’t soar quite as high as the actors. As in the first two titles, side characters play a major role in the story of Second Son. Unfortunately, we hardly get any context for our companions this time around. They make occasional appearances during missions, typically directly following your initial encounters with them, but you’ll go through most of the game on your or with your older brother, Reggie.

Reggie shares the spotlight with Delsin from the first moments of the game, cracking all the games best one-liners and providing a great counter-balance to Delsin’s free spirit. I wish the other characters had a chance to shine like he did, but there are plenty of seeds planted for the inevitable sequel.

Infamous: Second Son is the long-awaited emergence of another exciting console generation, a breathtaking open world that gives us a glimpse of what the PlayStation 4 is capable of. Despite some stumbles in the story department, Infamous provides some of the most enjoyable, fast-paced combat in the history of the series and sets up a bright future for Sucker Punch on the PlayStation 4. Infamous: Second Son is a thrilling adventure that shouldn’t be missed.

Sony provided us with a copy of Infamous: Second Son on the PlayStation 4 for this review.