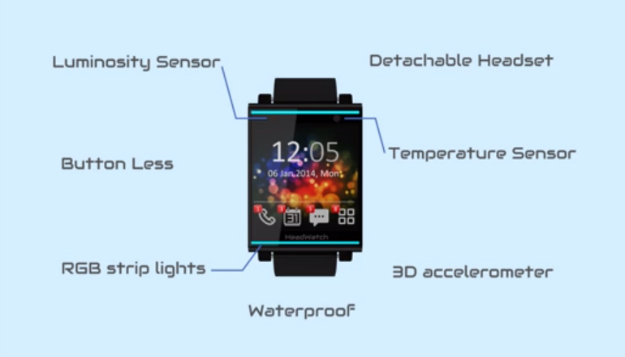 The HeadWatch is a brand new smartwatch concept that’s currently raising money on Indiegogo in hope of becoming a commercial product. In addition to offering the expected smartwatch features, the device also doubles as a Bluetooth headset that could be used together with a smartphone that’s paired with the device. The concept resembles Huawei’s recently launched TalkBand wearable, which is a fitness band with a detachable screen that doubles as a Bluetooth headset.

The HeadWatch’s watch face can be detached from its strap, and used like a regular Bluetooth headset for wireless calls. The HeadWatch packs a color LCD display and includes variety of sensors including luminosity, temperature and 3D accelerometer. It also has a couple of customizable RGB strip lights on top and at the bottom for notifications and it’s waterproof.

It’s not clear what operating system the smartwatch runs, but it can be paired via Bluetooth with iPhone, Android and Windows Phone devices. As for battery life, the HeadWatch’s battery is supposed to last at least two days, the company says.

However, unlike other smartwatches out there, the HeadWatch doesn’t seem to have built-in fitness capabilities, although additional stretch goals indicate that it may support such apps.

The cheapest HeadWatch that can be purchased via Indiegogo costs $169, with the device expected to be priced at around $249 when it launches next year – early backers will get their device in January and March 2015, depending on their purchase. The campaign has an impressive $300,000 funding goal and about two months to make it all happen. In case further stretch goals are reached, other default features will be added to the smartwatch including activity and sleep tracking.

A video showing the HeadWatch smartwatch follows below.