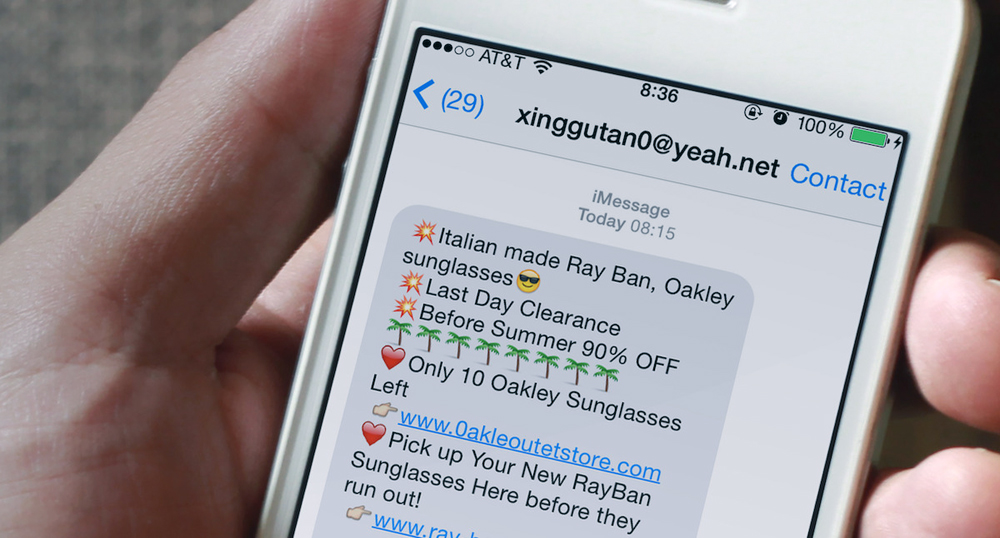 Apple’s iOS and OS X messaging product iMessage is used by millions upon millions of people around the world, and for the most part, it’s a great service. iMessage includes none of the bells and whistles found in other popular messaging apps like WhatsApp, Kik, Line and BBM, but Apple did a great job of providing just enough differentiation that users feel even more locked into the iOS ecosystem.

Here’s a perfect example from my own experience:

As nice as iMessage has become for users, there are still some annoyances that come along with Apple’s messaging service — and the big spam problem Apple users now face is quickly making its way to the top of the list.

FROM EARLIER: Apple’s iMessage problem is worse than we thought

In recent months, iMessage users have been getting slammed with spam messages, most of which include links to websites that hawk fake Ray-Ban and Oakley sunglasses. I get at least a few of these messages every month, and most people I know do as well.

Apple has remained silent on the issue thus far, and there’s no telling if Apple is working internally to address the spam and put an end to it. So there’s only one thing to do if you want to stop the madness: tell Apple about it over, and over, and over again.

If more people continually report each spam message they receive, Apple is far more likely to make the issue a priority.

Each and every time you get a spam message in iMessage, report it to Apple using this procedure found on the company’s support site. It couldn’t be easier — you just need to email a screenshot of the spam message to imessage.spam@icloud.com along with a few details.

In addition, be sure to block each spammer using the following steps:

You still may continue to receive spam from different senders, but blocking spam addresses is always a good idea.