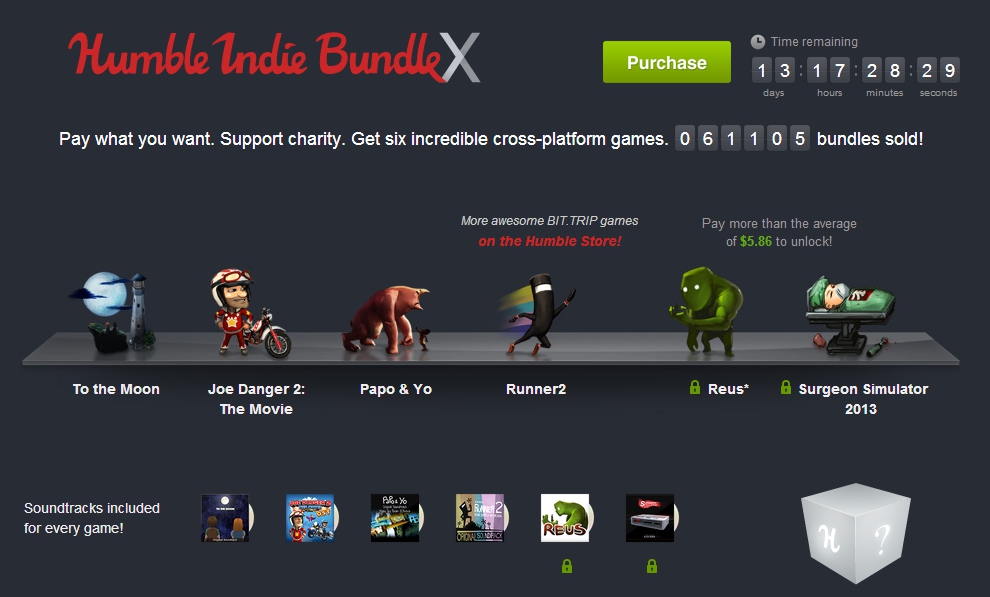 The best deal in indie gaming is back for its tenth run, and this time the theme is cross-platform availability. Humble Indie Bundle X went live on Tuesday and features six great games that can be played on Windows, Mac or Linux computers. Many of the games are making their Mac and Linux debuts as a part of the bundle as well. This time around, the games featured are as follows: To the Moon, Joe Danger 2: The Movie, Papo & Yo, Runner2, Reus and Surgeon Simulator 2013. Reus and Surgeon Simulator will only be available to customers who pay more than the average at time of purchase. All of the games you receive will also include a soundtrack.

In case you’ve missed out on all the previous offers and have no idea what any of this is, the Humble Bundle is a periodic sale which gives gamers the chance to pay whatever they want for a selection of popular games on a variety of platforms. By paying more than the average, you will gain access to additional games, and as the two-week-long sale ticks down, developers will add even more incentives for generous customers.

When you scroll down the page to pay for your bundle, you will be presented with a few options. You can decide to pay a custom amount or choose one of the presets, but in order to receive Steam keys, you have to donate at least $1. After you’ve decided how much you want to spend, you will have the option to split up the proceeds among the game developers, the Humble Bundle team and the two chosen charities: Child’s Play and the Electronic Frontier Foundation.

After just a few hours on sale, over 60,000 bundles have already been sold. There isn’t a bad game in the bunch, so if you’re looking for a gaming fix in the January drought, you can’t go wrong with Humble Indie Bundle X.