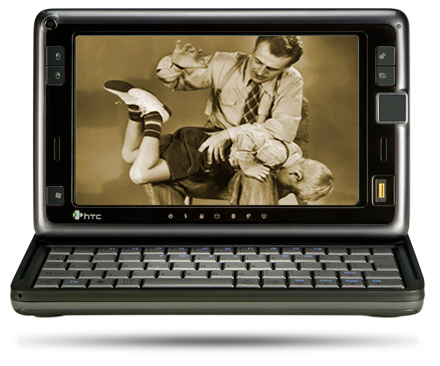 Like seriously. You’d think a company as fantastic and buttoned-up as HTC would be able to stick to a release date, right? We stopped counting a while ago, but off the top of our head, it looks like the HTC Shift release date has slipped more than 4 times. While initially announced to be available in Q3 ’07, the date then changed to December. Then January. Now, it’s looking like February. I’m not going to lie — I’ve been waiting a long time to start using a Shift — this is getting crazy. You might be thinking, “oh snap! There’s something BG can’t get his hands on!” But you’re wrong. It’s just that a pre-production model doesn’t turn me on all that much. You have to think of the specs of the device, and I shudder at the thought of an Intel 800MHz Stealy running Vista. I’ve already downgraded my OQO 02 and Sony UX490 to Windows XP, and a pre-production buggy HTC Shift with Vista could be one of the most unappealing thoughts ever. There’s also another problem, and that’s the price tag of $1,650 or higher. It’s high enough to scare off anyone but the most serious mobile professionals, and while that’s not stopping us from purchasing one when it’s available, it might be hard for HTC to pawn this off as easily as they thought. It was after all announced way back in March, and the mobile computing market has changed quite a bit. We’re not totally knocking it, it’s a sexy beast. But the specs are really not that impressive anymore. The 800×480 resolution is definitely small for a 7-inch screen, the processor as we mentioned is way underpowered, and currently there’s only 30 and 40GB HD options. That’s what happens when it takes so long to bring a product to market. Anyone remember the Flipstart? The biggest thing the Shift has going for it is the integrated HSDPA (it’s tri-band UMTS/HSDPA, quad-band GSM/GPRS/EDGE), and the keyboard. But again, there are other options on the market currently. So, will we end up buying one? Yeah, ’cause we’re suckers. But there’s not a whole lot of freaks willing to drop $1600 of their hard-earned dough for a continually pushed back mobile PC that’s underpowered and from a manufacturer who’s never made PCs before. Word of advice, HTC? Release the friggin’ thing before anymore of your customers jump ship! After all the pre-ordering and waiting, most of them have cancelled their orders and bought something else. If you’d like to sell more than a couple thousand units, we suggest you move swiftly.